Up, Up, and Away through Utopia

UncategorizedNovember 20, 2016Comments Off on Up, Up, and Away through Utopia

Bright colors, funky fonts, catchy music—these are the staples of modern day advertisement stunts that are aimed towards a calculated target audience. Children are the next generation of our population and possess the most malleable of minds, arguably making them the easiest and most effective group in society to manipulate. Toy advertisements and picture books inculcate deep, hidden ideological values and beliefs that are extremely subtle. To the average consumer, it is nearly impossible to recognize that we are being fed such propaganda. An equally, if not more widespread, tactical method of expressing these ideas are carried in children’s films. We are persuaded to identify with the film’s characters through their hardships and are drawn towards the visually appealing, happy endings, often times subconsciously supporting the existing social structure. As M. Keith Booker points out, “many American children’s films can be quite effective as works of art, aesthetically fascinating and potentially enthralling to young viewers” (187). The aesthetic appeal to children provides an easy way for these films to ingrain and shape “the mainstream values of our society, which are to an extent constantly in flux, continual change and innovation being a basic and inviolable tenet of consumer capitalism” (184).

Pixar’s 2009 blockbuster Up is a typical children’s film that seems innocuous at first glance, but contains hidden ideological statements and engenders desires for an alternative to the status quo. The film begins with a young boy, Carl, who stares open-mouthed at the adventures of explorer Charles Muntz flickering on the black and white screen of Movietown News, “Spotlight on Adventure.” Carl lives vicariously through his hero, pretending to overcome mountains and canyons with rocks and cracks on the sidewalk. He is consumed by his childish fantasy of growing up and becoming just like Charles, and his passion for adventure is complemented by that of his childhood friend and future wife, Ellie, an equally ambitious and imaginative dreamer. Carl promises Ellie he’ll take their future house to Paradise Falls in South America in a blimp, and they’ll explore the wilderness together there. On the surface, this childhood fantasy seems harmless, but it is rooted in imperialism. Just as the United States has continued to extend its control internationally through economic, cultural, and military imperialism, Muntz embraces the ideas of imperial conquest by going to South America to conquer and catalogue its inhabitants. These values are superimposed on Carl through his idolization of Muntz. 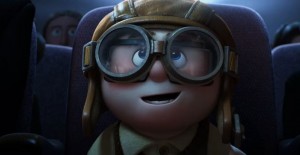 A young Carl is enraptured by the adventurer Charles Muntz

The film first mimics the repressive social structure of our own society by taking us through Carl and Ellie’s life together. Through the years, they build a house, open a zoo, and try to have a baby (but are not successful due to a miscarriage)—perfectly normal decisions to make as serious adults. But at the same time, their dream of becoming adventurers like Muntz and placing their house by Paradise Falls is never fulfilled. Their childhood visions gradually slip away as everyday distractions of adult life occupy their time and exhaust their savings. What happened to their fervor for adventure, for an imaginary world, that they held onto so tightly as children? The mundane tasks of life inevitably overcame this dream, a common occurrence reflected in our own lives.

Here, the movie introduces a utopian solution that appeals to us—an alternative to the nonstop work that takes over our lives. Ellie’s death catalyzes a painful transition for Carl, who believes that by letting go of their childhood fantasy, he and Ellie did not have the chance to live up to their expectations and dreams. Ellie’s death painfully reminds Carl of his broken promise, causing the fantasy to resurface. As Carl wakes up one typical morning, his bored facial expression and dreary surroundings point to the repetitiveness of his life. He eats bran cereal, cleans the house, and goes out to sit on the porch, void of any excitement or expression. The tune of “Habanera” from Carmen plays in the background, whose unheard lyrics sing of fickle love that “comes, goes, then it returns / you think you hold it fast, it flees.” This scene in particular, plays with the utopian desire to “fly away” from the passive, structured life that engulfs everyone around Carl—the construction workers, the shoppers in the city, and the window cleaner. Carl surprises everyone who only thought of him as a senile old man by doing the unexpected: he leaves this modern age and travels, figuratively, back in time to the nostalgic era of exploration and of Charles Muntz.

In our society today, capitalism has taken over our practical desires, but we still have innate impulses to do the unexpected and escape the rigidity and passivity of mass consumerism. Russell, a young Asian American boy who joins Carl in his adventure in order to earn his “Assisting the Elderly” badge, has never camped outdoors and does not even know how to build a tent despite being a Wilderness Explorer. Russell’s inexperience with the wilderness suggests our capitalist society’s detachment from nature. Matthew Arnold believed that reading about agrarian society such as poems on nature cultivates us towards the natural world that is not focused on commercialization, thus “through this knowledge, turning a stream of fresh and free thought upon our stock notions and habits, which we now follow stanchly but mechanically” (Arnold 5). Similarly, when Carl decides to fly his house to a far-away land untouched by civilization, the film inspires utopian fantasies to revert back to a time when we were not entirely entrenched in commercialism. The grand depiction of thousands of colorful balloons rippling across the sky contrasts with the gray, static metropolitan society, encouraging utopian hopes and an alternative to the culture industry.

Although the audience is presented with this utopian vision of freedom through Carl and Russell’s crash-landing in South America after enduring a thunderstorm, this dream is slowly but surely deconstructed as they continue on their journey to Paradise Falls. Carl indeed fulfills his promise to his late wife when he lands his house, which he affectionately calls “Ellie,” next to Paradise Falls, but it is a very melancholy achievement. A worn-down Carl enters his house, now in shambles from the bumpy journey, and sits down in silence in the chair that once offered comfort and joy. In a desperate attempt to save the house and preserve the promise to his wife, he relinquishes the human values of family, interdependence, and collectivity by giving Kevin, the “Monster of Paradise Falls” indigenous bird that Russell effectively adopted, over to Muntz. Carl reverts to the individualistic, isolated character that he was at the start of the adventure. In our own society, capitalism prioritizes individualistic gains and tendencies, and we lose sight of communal ideals. The sense of isolation that Carl faces is reflected in us, and we are thus drawn towards the film’s utopian solution of social bonds. Carl ultimately realizes his dream of moving to Paradise Falls is unsatisfactory and worthless compared to the danger of losing his friends, and abandons his imperial fantasy. 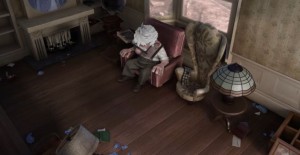 Carl finally achieves his dream, but is more broken than before

In “Reification and Utopia in Mass Culture,” literary critic Fredric Jameson argues: “the works of mass culture cannot be ideological without at one and the same time being implicitly or explicitly Utopian as well: they cannot manipulate unless they offer some genuine shred of content as a fantasy bribe to the public about to be so manipulated” (144). Ideology or utopia cannot exist without the other, for utopian solutions are needed to manipulate the audience into complacency with existing conditions. Indeed, Up initially leads the viewers to cheer for Carl’s initiative to embark on an imperialistic adventure under the cover of a utopian alternative to the culture industry. At this point, the film manipulates our desire for adventure and spontaneity in order to portray imperialism in a positive light. However, the film diverges from Jameson’s argument that “mass culture [is] a transformational work on social and political anxieties and fantasies which must then have some effective presence in the mass cultural text in order subsequently to be “managed” or “repressed” (141) when the communal ideals overcome the film’s initial support of imperialism. Not only does Carl leave his beloved house behind on Paradise Falls, the movie also portrays Muntz, an embodiment of the imperialistic spirit, as ruthless and single-minded. When Carl finally meets his hero, he learns that Muntz’s search for Kevin, the bird that he has been accused of fabricating, has driven him mad; Muntz has been killing off explorers who come to Paradise Falls, thinking they are trying to steal the elusive bird from him. The audience is supposed to root for Muntz’s demise, for he stands against Carl’s utopian values.

It is also important to note the rejection of the elementary family throughout the film, and especially after Carl embraces social bonds over his childhood dream. The elementary family consists of a man and woman who are married to each other, and their biological children. This family structure has been historically touted as bringing stability to society, especially after the advent of industrialization and early capitalism (“Traditions and Encounters”). Carl and Ellie live happy lives even though they are not able to have children, and Carl’s family ultimately consists of an old white man, an Asian American boy, a talking dog, and a South American bird. This utopian alternative to the patriarchal, monocultural idea of family is made attractive to us because Muntz, whom the film portrays as the antagonist, tries to break apart this family. The film thus reflects our own desires for social progress. 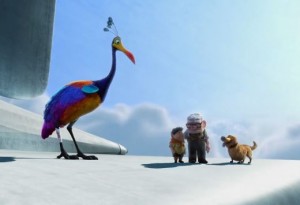 Entertainment provides both an ideology and a utopian solution in order to contrast the two, but it does not mean that the utopian values are used as a cover-up for unsettling ideology that manipulates us into obedience towards the status quo. The film stimulates our longing for social bonds and acceptance, directly opposing the pro-imperialism sentiment at the beginning of the film, which was supported by the utopian desire to rebel against the culture industry. What is even more important to remember is what actually sparked Carl’s imperialistic fantasy in the first place—the cinema. As a boy, he took in the cinema’s portrayal of the imperialistic Muntz as a righteous and patriotic adventurer who promises to regain his honor after being denounced as a fraud by bringing back the “Monster of Paradise Falls.” By actively choosing to leave behind this fantasy generated by the media, Carl refuses to let his desires be controlled by the culture industry. Instead of manipulating us to be satisfied with our current social structure, Up leaves us with an anti-culture industry stand only made possible through the utopian feelings of interpersonal relationships.

Pictures were screenshot from DVD