The Williams Telos believes that every person is fearfully and wonderfully made in the image of God. The deaths of Ahmaud Arbery, Breonna Taylor, George Floyd, and countless others are not only injustices against the Black community but also injustices against the Creator. Black lives matter. We lament their deaths as a part of the longer, systemic racism against our Black brothers and sisters that ultimately points to the problem of sin in our society. As those who hope in the death and resurrection of Jesus Christ, we are not called to be silent. We are not called to be complacent. We must recognize our responsibility as believers to pray for and work toward justice in our homes, communities, and cities.

To our non-Black Christians, we urge you to speak and act in a manner worthy of the calling we’ve received. To walk in Christ-likeness is to listen, learn, and engage. Listen to your Black brothers and sisters who are suffering. Engage in uncomfortable conversations about race and privilege. Learn about ways to support the Black community emotionally, socially, politically, financially. Do the work. And above all, pray to God for healing, reconciliation, and justice. 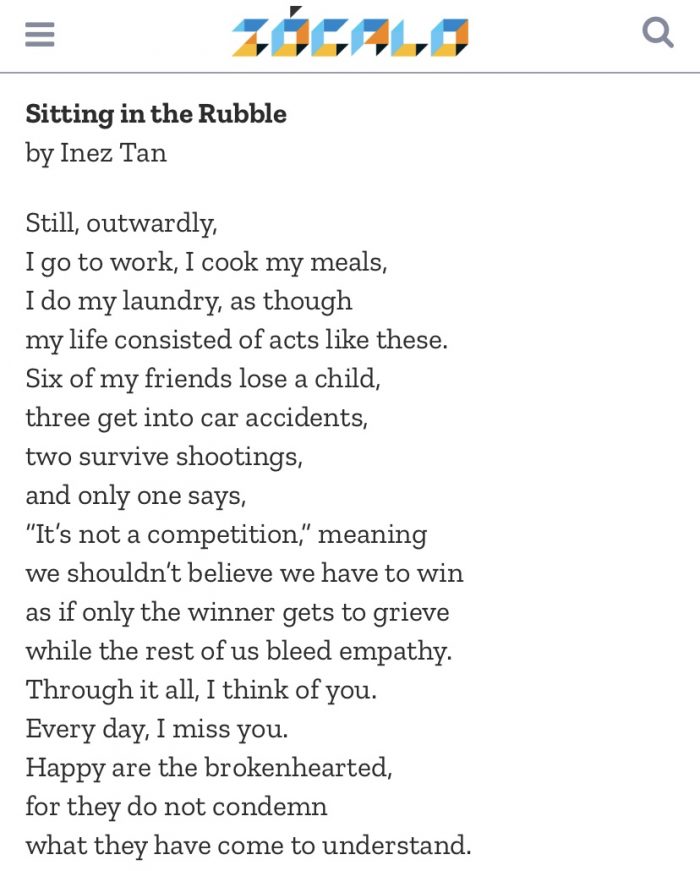 Sitting in the Rubble
by Inez Tan

Still, outwardly,
I go to work, I cook my meals,
I do my laundry, as though
my life consisted of acts like these.
Six of my friends lose a child,
three get into car accidents,
two survive shootings,
and only one says,
“It’s not a competition,” meaning
we shouldn’t believe we have to win
as if only the winner gets to grieve
while the rest of us bleed empathy.
Through it all, I think of you.
Every day, I miss you.
Happy are the brokenhearted,
for they do not condemn
what they have come to understand.

Written by Inez Tan ’12, a former Editor-in-Chief of The Williams Telos 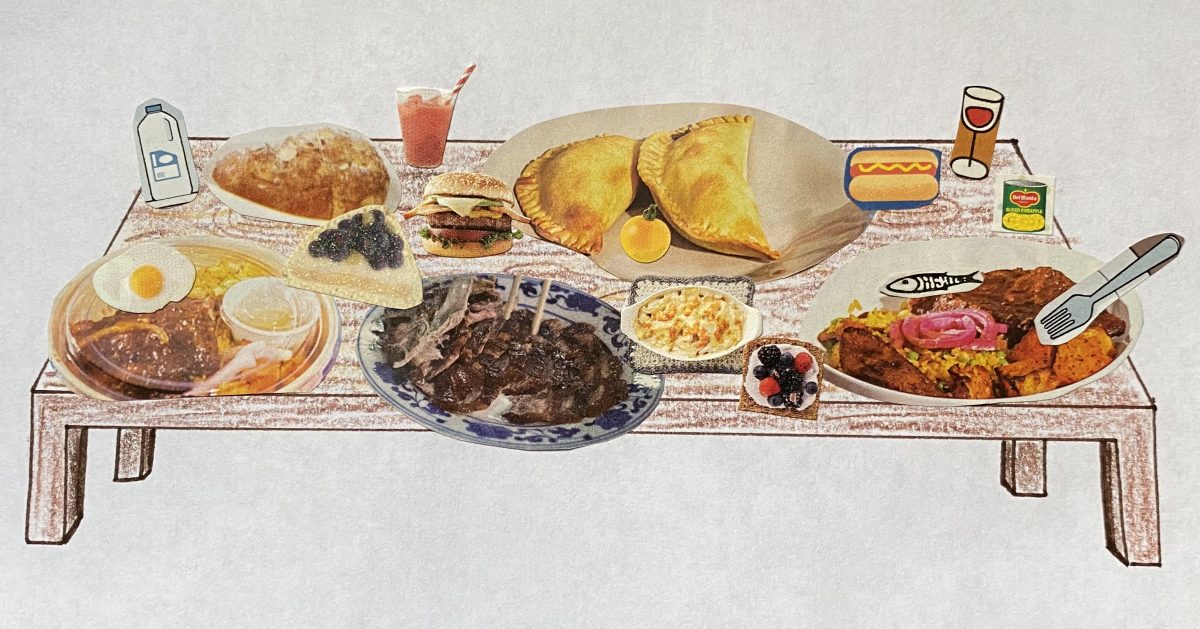 For the past couple of days, I’ve had a line from UPPERROOM’s song “Surrounded (Fight My Battles)” stuck in my head.

In my head, I pictured that table, a table overflowing with good food – macaroni and cheese, broiled fish, 北京烤鸭 (Peking duck), iced tea, cake. Then, using old copies of The New Yorker, I created it.

Even though I walk through the valley of the shadow of death,
I will fear no evil, for you are with me;
your rod and your staff, they comfort me.
You prepare a table before me in the presence of my enemies;
you anoint my head with oil; my cup overflows.
Surely goodness and mercy shall follow me all the days of my life,
and I shall dwell in the house of the Lord forever.
Psalm 23:4-6

Living during these COVID-19 times can feel like walking through a shadowy valley of darkness and death. Yet because I know that God is with me, I have no reason to fear. None of us do. Not only does He comfort us, but he also sets a table, invites us to sit down, and delights as we feast.

When I read these Bible verses this morning, I was struck with a vivid image of a woman on her knees, sadly sowing seeds in the distance while another woman, smiling triumphantly, ran toward me, her arms overflowing with wheat. I decided that I had to draw this image, so I set my schoolwork aside and devoted my entire day to capturing it – something I could do thanks to the flexibility my quarantine schedule allowed.

I realized that even though the joyful woman was in the foreground of the picture in my head, sorrow and anguish were central to her story. As a result, I chose to have a crying woman with her face in her hands as my focal point. Initially, I saw the sorrowful sowing and triumphant reaping as separate events, but as I drew, they became more connected. Something clicked: sheaves of wheat are the fruit of tears. In other words, tears are the seeds, the starting point, the origin of the sheaves.

Often, I struggle to recognize my sorrow as a legitimate emotion, but this winter when I was homesick at Williams, a friend recommended that I sit in my sorrow and really let it sink in. These verses remind me that sorrow is not something to be brushed aside or ignored. Instead, sorrow should be planted. But what does that mean?

Planting sorrow can look like praying to God at two in the morning, holding my face in my hands, thinking quietly, and listening to sad songs. Yet when a seed is planted, it also becomes hidden and removed from sight. In that respect, planting sorrow also can look like giggling with my sisters as we dance together, cooking with my mom, and working out with my dad.

Many of us may be planting sorrow during COVID-19, desperately waiting for something to grow. However, when you plant seeds, you need to physically let go of the seed so that it can fall into the dirt and begin to grow. There is a releasing of control over your sorrow, and we need to trust God for the eventual harvest. I want to remind us that growth takes patience. In the Bible, God is tremendously patient with His chosen people, the Israelites. He urges them to return to Him for hundreds of years before sending them into exile. But that’s not the end of the story – He ultimately saves them and frees them from their captors. God promises us that He has already made everything beautiful in its time.[1]

As God’s people, I do not think that we are at the point of returning with songs of joy quite yet, but there is hope that God will completely transform our sorrow into singing as we turn our hearts to Him. Let’s keep planting.

*Artist’s note: The blue lines extending off the page represent how this cycle of sorrow and joy is ongoing. 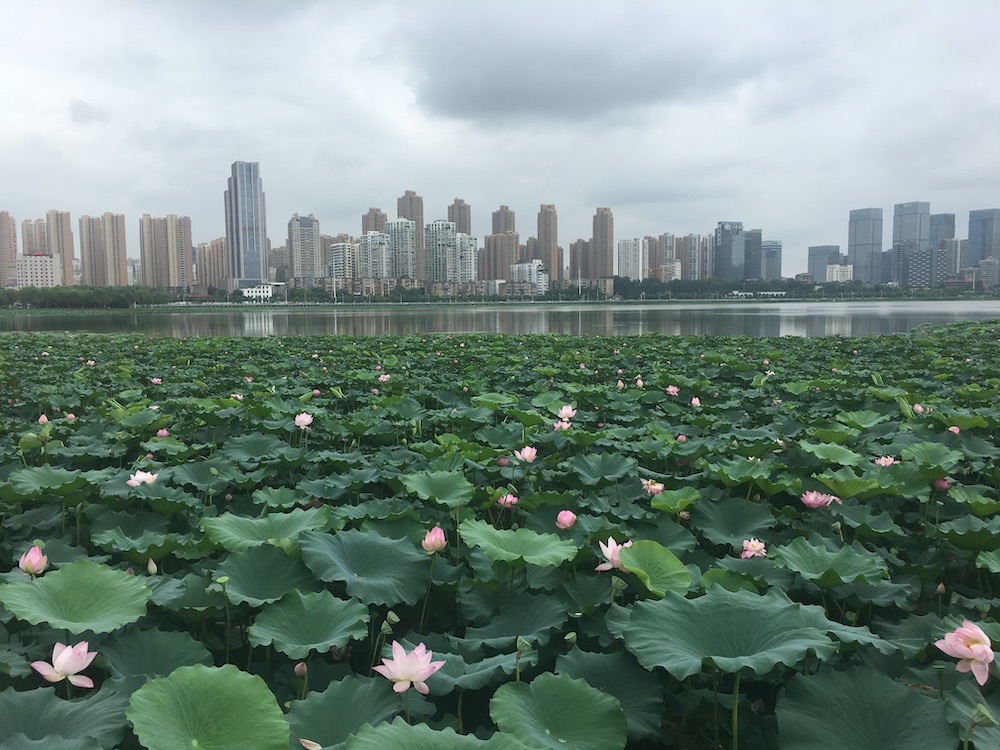 As my parents shared the news with me about how there was a new virus moving quickly through the streets of Wuhan, I stared at the screen, my eyes on the video call, but my mind elsewhere. A week later, when we called again, they began telling me about their friends who had contracted the virus. I listened and nodded. It was mid-January; I was caught up in the excitement of Winter Study, and the existence or effects of a coronavirus halfway across the world did not seem very real to me.

After President Mandel announced the closure of the College on March 11, I ran down the stairs of Schapiro and burst outside to the lawn, where others were frantically on their phones. When I called my parents to tell them the news, my dad was unfazed by my expression of shock and uncertainty at the decision. My mom had already fallen asleep, and he did not bother to wake her up and let her know. To a couple who had been living in the heart of the COVID-19 pandemic—who were evacuated on a cargo airplane back to the States and quarantined in a military base for two weeks—to a couple who had experienced so many transitions in the past several weeks that they were now living from Airbnb to Airbnb, the unexpected news of the College’s shutdown was not so unexpected for them.

My parents moved to Wuhan in the winter of 2018, but because I was attending an international boarding school in South Korea, I never lived in Wuhan for an extended period of time. Even so, I have a connection to the city. I have run through its streets, meandered along paths following its many lakes, conversed with its residents and visited museums to learn its history. Yet how separated was I from my parents that I was unable to empathize with their grieving and their mourning for the city that they were living in.

In the Purple Bubble, I often find myself forgetting the reality of death and suffering in this world (whether from COVID-19 or not), focused instead on my own concerns and desires. I’m more concerned with how I’m doing in my classes, with completing my papers, with running from meeting to meeting, with being busy, busy, too busy to think about what’s happening in the world. Over the past couple of weeks, however, I have learned to re-center attention away from myself and lament.

Lament is the language of suffering, the expression of sorrow and grief. It is a response that confronts the reality of people who face suffering and injustices of all kinds every day. Lament reminds us that death is not new. All lives on this earth will come to an end and forgetting is an indicator of privilege.

As a Christian, I am called to love the world as God loves the world— fiercely, intimately, sacrificially. This means that I cannot remain indifferent to people experiencing hardship across the globe. I cannot be impartial in conversations about how actions by the College can and will disadvantage certain student populations. I cannot disregard the widespread racism faced by Asians and Asian-Americans during this time, nor separate its existence from structural issues of discrimination in the United States. I cannot pretend that everything is fine or succumb to the lie that there is nothing that I can do. Doing so fails to love the way that I am called to love.

COVID-19 has exposed my apathy and laid bare my privilege. I have been able to address this privilege through lament because I can mourn for and with others. Lament is an inherently unifying act that urges me to remember how there exists a world beyond the purple bubble. I commune with those around the globe in grief; I empathize with others’ hurts as if they were my own. I lament in a way that reflects the deep love of God.

However, it is not enough to remain in a state of lament about the pandemic’s impact. Lament demands a response. If I truly love and empathize with those around me who are suffering, that love will drive me to respond with generosity. Being generous can mean using my increased time and energy to check in on my friends and family, and care for their well-being. It can mean being intentional with how I spend my money, supporting those who are struggling financially and not using my untouched spring break savings to buy more things for myself. In the midst of the pandemic, in the midst of isolation, I choose to acknowledge my privilege of ignorance and respond generously. I choose to love. 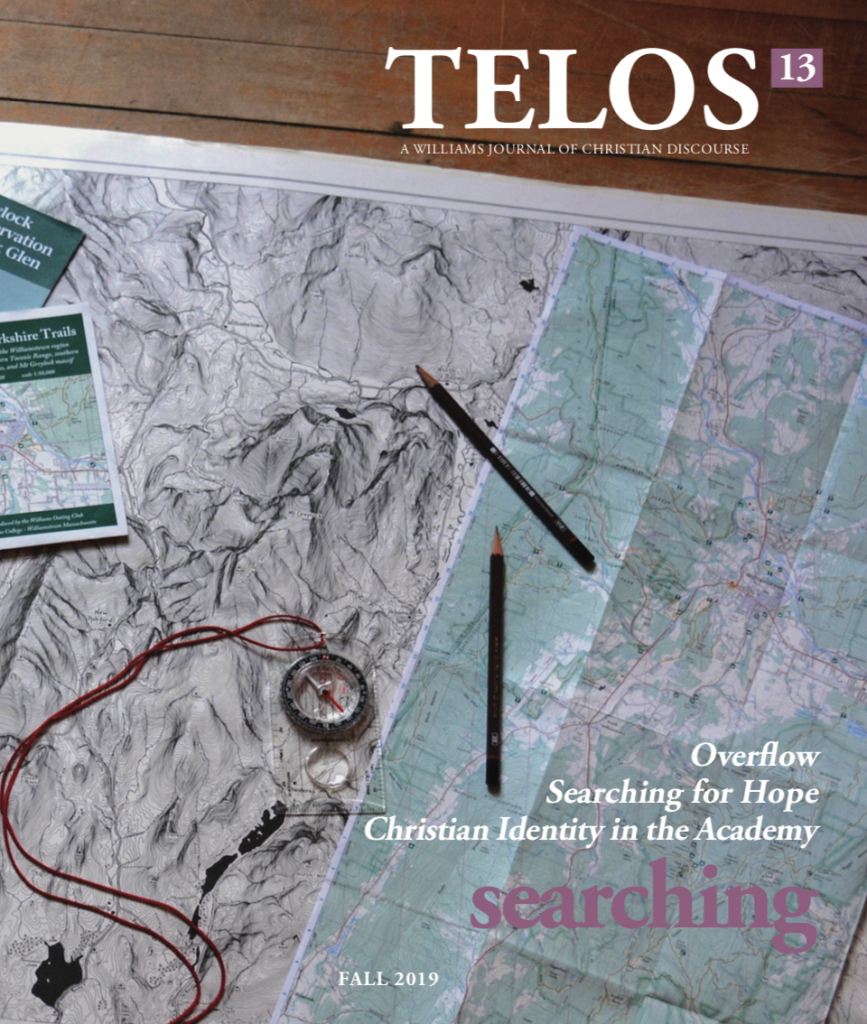