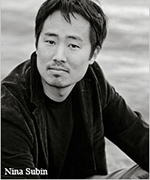 YANG, JEFFREY (1974-) Jeffrey Yang is an American poet, translator, and editor best known for his books of poetry An Aquarium (2008) and Vanishing-Line (2011). Born in Escondido, California, Yang attended the University of California San Diego. With an initial interest in pursuing the sciences, Yang graduated with a double major in Animal Physiology/Neuroscience and English Literature/Writing. During his undergraduate studies he worked at the Scripps Aquarium in La Jolla as an aquarist assistant and educator. Yang also went to sea for four months on a research vessel as a lab assistant with the Scripps Institute of Oceanography. After graduating from college, Yang traveled to China and lived in a small city called Lianyungang for a year. This furthered his engagement with Chinese culture and later contributed to the addition of Chinese tradition as a prominent theme in his works. Shortly after, he enrolled in New York University, where he earned an MFA in creative writing. As of 2015, he works as an editor for New Directions Publishing and New York Review Books in New York City. His poems have been translated into several languages, including a collection Orca (2013) in Chinese, as well as Ein Aquarium (2009) and Yennecott (2015) in German. He is the editor of the anthologies Birds, Beasts, and Seas: Nature Poems (2011) and Time of Grief (2013). He has also translated the works of classical and Chinese poets, including Su Shi’s East Slope (2008) and Liu Xiaobo’s June Fourth Elegies (2012), as well as a forthcoming autobiography by Bei Dao called City Gate, Open Up.

Perhaps the first poetic bestiary of the ocean ever written (aside from Ted Hughes’s whimsical children’s collection The Mermaid’s Purse in 1999), An Aquarium is a compilation of fifty-six poems in free verse structured primarily in alphabetical order from abalone to zooxanthellae. Yang expands the scope of his poems by weaving in a number of overlaying anthropological and scientific themes, with references to philosophy, politics, religion, and world languages. In contrasting self-centered humans to symbiotic and harmony-loving sea creatures, Yang creates a marine world to which people can not only relate, but from which we can also learn. In “Manatee,” for example, Yang directly addresses the marine mammal, “the world’s happiest vegetarian,” asking for guidance on our behalf: “O Great Ancestors! Teach us/ how to love our enemies.” The comprehensive and inseparable history of humans and sea creatures is also central to Yang’s poems in An Aquarium. In “Shark,” for example, Yang draws upon the history of the shark and its fossils, which aligns with the history of early tribal peoples throughout the world:

The fossil record of sharks reaches
far past the dinosaurs. To the Hawaiians
mano, god and messenger of the gods;
to the Mayans xoc fish carved glyphs.

Yang further explores historical themes in the context of a particular place and time in Vanishing-Line, his second collection of poems. Although the focus on the stories of people is more prominent than animals in this collection, the ocean continues to play a critical role in these poems and serves as a constant subtle backdrop of human history, spanning from the earliest civilizations to the twenty-first century. In this historical context within Vanishing-Line, Yang yet again interweaves the marine world with the human world in the short collection of poems called “Yennecott”:

sea
a screen of sun

all-seeing sun of the future past
from which things bloom

After writing of recent island tourism in New England and the roots of the North American slave trade, he continues:

Although human history rather than biology becomes the focus of these poems, the ocean and its life forms serve inevitably and perpetually to connect and guide human endeavors, not limited to exploration and trade of goods and people. In “Yennecott,” which draws explicitly on historical documents regarding the settlement of America’s eastern seaboard, including sea-oriented literary texts from Homer to Melville, Yang depicts the sea as the fluid conduit to exploitation:

From the ancient base of Piraeus passage
wharves crowded with trade, sea wine-dark

West to the “final stop” of Olson’s Pacific, Ahab
“END of individual responsible only to himself.'”

On a personal level, the sea in this epic poem then restores a sense of transcending wonder to the individual, to the poet, who in its concluding lines walks along the “sea’s margin” and the time-worn “rimrock of the island” only to quietly confess to himself:

Was an experience of walking
Irony replaced with nothingness
Immensity and transience.

Jeffrey Yang reads his poetry on a broadcast of PBS NewsHour: