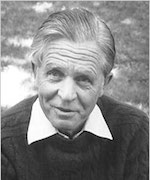 WARNER, WILLIAM W[HITESIDES]. (1920-2008). Naturalist-author William W. Warner was born in New York City. From 1944 to 1946, he served in the U.S. Navy, where he rose to the rank of lieutenant, junior grade, and was awarded a Navy Commendation Medal.

Warner is primarily known for his nonfiction work Beautiful Swimmers: Watermen, Crabs and the Chesapeake Bay (1976), an ethnographic chronicle of the crabbing culture of the Chesapeake. While painstaking in its scientific descriptions of crabs and crabbing technology, Beautiful Swimmers engages the lay reader with Warner’s humorous flourishes and his anthropologist-like attention to the rich detail of the lives of Chesapeake watermen. The book captured the 1977 Pulitzer Prize in general nonfiction and the Phi Beta Kappa Award in science.

His second book, Distant Waters: The Fate of the North Atlantic Fishermen (1983), grew out of his research trips aboard several North Atlantic trawlers. The work examines the impact of the giant vessels on the Atlantic fishing industry and serves as both a critical assessment and an homage, since such trawlers later fell out of use after the enactment of fishing quotas. Warner has been active in various conservation organizations, including the Rachel Carson Trust for the Living Environment and the Chesapeake Bay Foundation. In 1988 he retired from a lengthy career of government service, most notably as an information officer in Latin America and as a research associate and administrator for the Smithsonian Institution.

Distant Waters: The Fate of the North Atlantic Fishermen (1983)