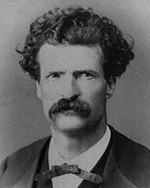 [CLEMENS, SAMUEL LANGHORNE], “MARK TWAIN” (1835- 1910). Though more widely known for his writing on the Mississippi River, Samuel Clemens traveled extensively at sea, experiences that find their way into a number of the writings he published under the name Mark Twain. His prose accounts of sea voyages contain much that is typical of Twain’s acute observations, social commentary, and wry humor.

Twain’s first sea literature can be found among the letters detailing his voyage to the Sandwich Islands printed in 1866 in the Sacramento Union and published in a revised form in Roughing It (1872). Among the passages of Hawai’i and its culture are some describing his fellow passengers, his sense of exhilaration and irritation at being at sea, and his graphic account of dashing through the waves in a native canoe. For Clemens, this voyage initiated a lifelong love of Hawai’i.

These qualities describe Twain’s later travel writings as well. Innocents Abroad (1869), culled like Roughing It from reports written to newspapers, records Twain’s voyage to and around Europe and the Holy Land. The narrative begins with a lively and extensive description of the preparations and the voyage, Twain again lauding the excitement and camaraderie of life on a pleasure cruise, with its dancing, playing games, and swapping stories. Twain also devotes some of his best prose to the beauties of the seascapes and the islands sighted. Following this opening section, Twain’s rambles through the Mediterranean countries are punctuated by only brief passages at sea, and he ends with a very short account of the monotony of the voyage home.

Later in his career, Twain undertook an even more ambitious cruise, an around-the-world lecture tour recorded in Following the Equator (1897). Although most of the narrative concerns travels on land, mainly in Australia and India, the passages at sea again reveal Twain’s love of sea voyages, and again he presents lush descriptions, interesting characters, and humorous stories, here even more comic and unstructured than in the previous narratives. Twain’s exuberant accounts of sea life are, however, in marked contrast to his condemnations of the imperialism he witnesses on land.

At the time of writing Following the Equator, Twain also produced three unfinished sea-disaster stories (later collected in Which Was the Dream, a volume written in 1897 but unpublished until John F. Tuckey’s 1966 edition), considered but rejected for inclusion in the narrative. “The Enchanted Sea-Wilderness,” a short fragment, records the trials of sailors who, forced to abandon ship, drift into a circle of currents between the Cape of Good Hope and the South Pole. “The Great Dark” injects elements of fantasy into the sea-disaster motif, as it describes a family’s microscopic voyage in a drop of water. Finally, “An Adventure in Remote Seas” expands the motif developed in “The Enchanted Sea-Wilderness” and involves a sealing expedition to an island in the Antarctic Sea.