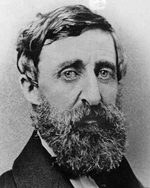 THOREAU, HENRY DAVID (1817-1862). Henry David Thoreau is most often associated with his birthplace and home, Concord, Massachusetts, and the woods, ponds, and streams in the vicinity of the town. But he frequently made excursions to other places, and often these travels took him to the seaside. The longest of these interludes was the seven months he spent living on Staten Island in New York, working as a tutor to William Emerson’s son (Ralph Waldo Emerson’s nephew) and unsuccessfully pursuing a writing career. He returned briefly to New York in the summer of 1850, to search the beach of Fire Island for the remains of Margaret Fuller, who had perished in the wreck of the Elizabeth. In July 1851 he spent a week walking the Massachusetts coast, from Plymouth to Hull. Several times he sailed from Boston to Bangor, Maine, as prelude to inland travels. Near the end of his life, in 1861, he ventured west to Minnesota, in an unsuccessful bid to relieve his tuberculosis; on the return trip he and a companion took a steamer from Milwaukee up Lake Michigan and then across Lake Huron. Thoreau also made many visits to the Massachusetts shore, including four trips to Cape Cod, ocean experiences that proved most important to his writing.

Thoreau was fascinated by watercraft of all types, writing in his Journal in March 1860 that a boat vastly expanded his experience of the world. Water plays a large role in much of his writing, in the form of rivers in A Week on the Concord and Merrimack Rivers (1849), ponds in Walden (1854), and both streams and lakes in The Maine Woods (1864). In Walden Thoreau remains pondside, and yet the sea plays an important figurative role in the work; throughout he invokes nautical metaphors, most often as a means of describing or advocating transcendentalist mental voyaging. The literal sea appears in Cape Cod (1865) and occasionally in the Journals. Thoreau visited the cape in 1849, 1850, 1855, and 1857, excursions that added up to about a month at the seashore. Immediately following his first visit, he undertook to read everything he could find about Cape Cod and to compose a lecture about his trip, which he soon was giving to appreciative audiences. He returned to the cape, in part, for more material, but though his second and third journeys are incorporated in what would become the book Cape Cod, the narrative follows the path of the initial trip, with asides on the next two visits. The 1857 trip is chronicled only in the Journal. The first four chapters of Cape Cod were published in Putnam’s Magazine in three successive issues in the summer of 1855. The book, however, wasn’t published till after Thoreau’s death.

Though some critics, such as Joseph Wood Krutch and Walter Harding, claim that Cape Cod is Thoreau’s “sunniest” work, a sort of holiday book, recent commentators have focused more on the work’s dark vision of nature, in contrast to Thoreau’s thinking about nature in his other writing. In Cape Cod, nature, specifically the ocean, is an indifferent and dangerous power, described as “savage,” its buffeting waves likened to hungry wolves. The book opens with the chapter “The Shipwreck,” in which Thoreau bears witness to the tragedy of bodies washed ashore, torn and rent by the sea in the aftermath of the wreck of the St. John off Cohasset.

Wreckage haunts the rest of his journey, as he repeatedly comes upon evidence of the sea’s devastating effect on human enterprise. But though he describes the destructive shore as a vast and chaotic morgue, Thoreau is more impressed than appalled by the ocean. He is not taken aback by the merciless sea but claims he sympathizes with the wind and the waves, that their power is simply evidence of nature’s laws. He insists in the first chapter that the shore’s “beauty was enhanced by wrecks . . . and acquired thus a rarer and sublimer beauty still.” The heaving ocean draws Thoreau, partly because it is so strange to his landsman’s eyes, but more for the way it indifferently takes human and other animal life. The profligacy of death along the seashore is for Thoreau a redemptive sign of the health and appetite of nature. So he wanders the beach in appreciation rather than fear, not only accepting but celebrating the wild and blunt ocean.