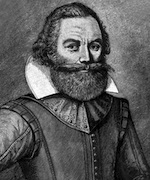 SMITH, JOHN (1580-1631). Although born in Lincolnshire, England, Captain John Smith initiated many traditions in American literature, among them geography, autobiography, and history.

A True Relation (1608), his earliest account of his experiences in the Chesapeake Bay region of Maryland and Virginia, is the first book in English written entirely in America. Besides recounting his Virginian explorations in several works, he reported on a 1614 voyage to the coast of New England (which he named) in A Description of New England (1616). His magnum opus, The Generall Historie of Virginia, ‘New-England, and the Summer Isles’ (1624), an extended compilation of earlier writings by Smith and others, was followed by a work of exceptional value to students of early American seafaring: A Sea Grammar (1627). An expansion of Smith’s own An Accidence or the Path-way to Experience Necessary for All Young Sea-men (1626), A Sea Grammar is based largely on a manuscript glossary of maritime terms by Henry Mainwaring and is the earliest handbook for seamen in English. Like Smith’s other writings, A Sea Grammar is infused with the personality of the great adventurer and proponent of New World colonization. His experiments with naval dialogue foreshadow a demand for realism in maritime language and seamanship, while his own character provided a ready-made prototype for the larger-than-life romantic sailor-hero that has dominated American literature of the sea since its inception.

At the time of his death, Smith was working on a book he described as “my history of the sea.” If any of the manuscript exists, it remains undiscovered. Smith’s extant writings have been edited and introduced by Philip Barbour in The Complete Works of Captain John Smith (1580-1631), 3 vols. (1986). A useful synopsis of Smith’s life and works is Everett Emerson’s Captain John Smith (1993).