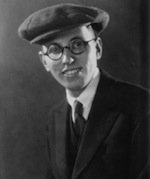 RICE, ELMER (1892-1967). Born Elmer Reizenstein, the playwright Elmer Rice is best known for his realistic and expressionistic dramas of urban life. However, he turned to the sea for two of his plays.

Between Two Worlds (first perf. 1934; pub. 1935) takes place on the S.S. Farragut, traveling from New York to Cherbourg and serving as a microcosm of the larger world and a means for keeping the characters together. The action centers on Kovolev, a Soviet motion-picture director, whose virility and charm are in contrast to Margaret Bowen, an American heiress who feels her life is worthless. The other Americans on board either share Margaret’s feelings of uselessness or are ignorant, frivolous, complacent, and materialistic. Rice’s attack is both broad, targeting Hollywood and racial prejudice, and more narrowly focused, attacking American complacency and Soviet conformity. The title serves double duty: the forty-two passengers are literally suspended on the ocean between two worlds, just as the best hope for the world is suspended between the individually imperfect systems of capitalist democracy and communism.

The Grand Tour (first perf. 1951; pub. 1952) combines an ill-fated affair with a love song for Europe, especially Paris, and an exploration of the tensions between morality and money. The play opens with Nell Valentine, a schoolteacher from Bridgeport, Connecticut, making arrangements for a European vacation paid for by the substantial insurance policies she had on her deceased father. On an ocean liner to Europe she meets Raymond Brinton, a banker from Minneapolis whose wife is divorcing him. After a whirlwind courtship in Paris and Chartres, Ray and Nell decide to marry when his divorce is final. After Ray reveals that he has embezzled money from his bank to finance his family’s plush, upwardly mobile life, a bank official tells Nell that Ray will not be prosecuted if he returns the money. Knowing that Ray does not have enough money, Nell uses her own money to repay the bank. She also realizes that Ray still loves his wife and leaves him. In the final scene, she breaks down while showing slides of her vacation to her students in Bridgeport, blaming her tears on hay fever.

Although both plays had short runs on Broadway and are not ranked among Rice’s best work, they reveal solid construction, a sense of theatrical flair, a concern for broad social and political issues, and an appreciation for ocean travel.

This entry was posted in R and tagged 20th Century, Passenger Travel, Plays. Bookmark the permalink.