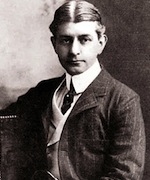 NORRIS, [BENJAMIN] FRANKLIN] (1870-1902). Although his short life was adventurous enough, including trips to Africa’s Transvaal and Cuba during the Spanish-American War, Frank Norris’ disposition to set two of his less successful novels partly at sea probably arose from his familiarity with the San Francisco Bay Area, where his family settled in the 1880s. Norris’ first novel, Moran of the Lady Letty (1898), centers on the encounter of the wealthy and genteel Ross Wilbur and Moran Sternersen, the daughter of the captain of the ship that rescues him. She succumbs to Wilbur and slips into a role submissive to her lover, however committed she has been to winning, to being one of the surviving fittest in life’s brutal struggle.

Here Norris is less concerned with individual psychology or roles than with large ideas, the irresistible forces that determine the course of personal lives. The sea serves more as a setting than as a naturalistically determining factor.

Moran is a melodramatic novel that begins predictably with the protagonist, a former Yale crewman, being shanghaied when he leaves an uppercrust social gathering and ventures near the infamous waterfront. Spirited away by the infamous Captain Kitchell and his small crew of shark-hunting Chinese, who throughout are drawn in the racist terms of the period, Wilbur and his new mates encounter the derelict bark Lady Letty. Kitchell’s hopes for salvage rights are dashed when the surviving daughter of the owner is discovered aboard. Following are fishing adventures and a battle with another Chinese crew for the ambergris prize carried by a dead sperm whale. In the contest Moran falls in love with Wilbur, is murdered by the thieving Chinese for the ambergris loot, and is allowed to drift out to sea through the Golden Gate in conventional Viking fashion.

Norris achieves a more fundamental naturalism in A Man’s Woman (1900). The first two chapters trace the Darwinian struggle across the Arctic ice floes of polar explorer Ward Bennett and his suffering crew after their ship, the Freja, has been crushed by shifting packs. Reduced to animal instincts, the surviving crew and even the dogs are thoroughly brutalized in their struggle against the elements. Bennett, his chief engineer, Richard Ferris, and the crew finally meet the whaleships they have been searching for. Their failed attempt to reach the North Pole has been in progress for four years before they return. The remaining 90 percent of the novel takes place in the United States, where Bennett is put in contrast to, and conflict with, Lloyd Seabright, a wealthy and self-reliant nurse. Drawn to Ferris before the journey, she is disappointed by his broken spirit, the result of losing his hands to frostbite. Lloyd’s desire to preserve what she can of her professional integrity and to be an independent woman suffers when she converses with Bennett. Ferris dies, and Lloyd admits her love for the harsh and brutal Bennett. She nurses him through the typhoid that he has contracted in his attempt to aid his comrade Ferris. She realizes that the Arctic explorer must play his manly part to her maternal instinct, and so he leaves with her blessing for another attempt to conquer nature and the elements.

Raw and flawed, A Man’s Woman is a vigorously naturalistic rendering. Norris focuses on the qualities that allow the hero to prevail against incredible odds rather than depicting the failure of victimized naturalistic protagonists such as he would with the farmers in The Octopus (1901).