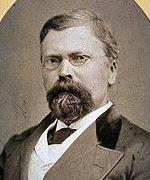 NORDHOFF, CHARLES, the elder (1830-1901). A journalist, Charles Nordhoff was born in Erwitte, a village in Westphalia, Prussia. At five, he emigrated with his parents to Ohio, where they died. Left an orphan in the care of a family in Cincinnati, he was apprenticed to a printer at age thirteen. After serving a year, he ran away. He became a compositor for a Philadelphia newspaper and then enlisted in the navy in 1845, joining the ship of the line U.S.S. Columbus on her world voyage to establish full diplomatic relations with China and to make America’s first attempt to open Japan. Returning home in 1847, Nordhoff joined merchant vessels sailing to Europe, the Far East, and Australia. After shifting to New England whaling and fishing, he came ashore in 1854 to begin a journalistic career.

He began by publishing nonfiction: graphic descriptions of sea life. The first to appear was Man-of-War Life (1855), a description of the navy from an enlisted man’s point of view. This book was followed with The Merchant Service (1855) and Whaling and Fishing (1856). These three were collected as Nine Years a Sailor (1857) and later retitled Life on the Ocean (1874). His grandson and namesake republished selections as I Served in Windjammers (1941). A fourth book, Stories of the Island World (1857), included descriptions of Madagascar, Java, Iceland, Ceylon, and New Zealand.

In 1857 Nordoff became an editor for Harper Brothers and then managing editor of William Cullen Bryant’s New York Evening Post, 1861-1871. In 1868 he published his only volume of fiction, Cape Cod and All Along the Shore, a collection of pieces from Harper’s and The Atlantic Monthly. He became Washington correspondent for James Gordon Bennett’s New York Herald from 1874 until 1890 and published several books on politics. At his death in 1901, he was considered one of the foremost American journalists. His grandson, the younger Charles Nordhoff, in collaboration with James Norman Hall, continued the tradition of maritime writing.