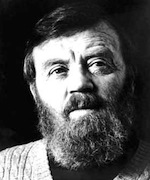 MOWAT, FARLEY [MCGILL] (1921-2014). Farley Mowat is one of Canada’s more popular and controversial writers. Born 12 May 1921, in Belleview, Ontario, Mowat graduated from the University of Toronto in 1949. He spent two years during World War II as an infantry officer in the Canadian army. Before completing his degree, Mowat interned in the Northwest Territories as a biologist, an experience that helped shape his literary career. In 1952 he published his first book, People of the Deer, a critique of the nation’s policy on Native Americans. Mowat would return to the Arctic region for later works such as Top of the World Trilogy (1976) and other writings about life on the sea and by the sea. He wrote two books at the request of the Foundation Maritime Company, The Grey Seas Under (1958) and The Serpent’s Coil (1961), a thriller about a Newfoundland tug. In 1965 he published Westviking: The Ancient Norse in Greenland and North America, a popular history of the Vikings. A pictorial account of Newfoundland’s coast, This Rock within the Sea (1968), enjoyed brief success, but his 1972 A Whale for the Killing, spurred by the death of a fin whale near Mowat’s hometown, Burgeo, received considerable international attention. His The Farfarers: Before the Norse (2000) describes the transatlantic voyage of a pre-Indo-European people, whom Mowat refers to as the Albans, from Scotland to Newfoundland in the 700s.

Mowat turned his love of the sea for at least two juvenile books, Curse of the Viking Grave (1966) and a twentieth-century pirate tale, The Black Joke (1962). His The Boat Who Wouldn’t Float (1969) won the 1970 Stephen Leacock Medal for humor. This delightful book is the humorous account of a schooner voyage along the coastlines of the Atlantic provinces on the way to Montreal for Expo ’67.

Mowat received numerous literary awards and in 1982 was named an officer of the Order of Canada.