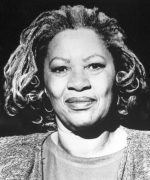 MORRISON, TONI (1931-2019). Toni Morrison was born Chloe Ardelia Wofford in Lorrain, Ohio. She was given the baptismal name of Chloe Anthony, and chose “Toni” as her nickname when a college student. She earned her BA in English at historically Black Howard University, and then earned her MA in English at Cornell University. She went on to have a teaching career before joining Random House as an editor. Her writing career kicked off with the publication of her first novel, The Bluest Eye (1970). Morrison would go on to publish eleven more fiction books, in addition to children’s books, short stories, critical essays, and plays. She won numerous awards, her most famous being the Nobel Prize in Literature in 1993, the first for an African-American woman. Morrison has been hailed as a writer of the Black experience and one who has written specifically for the Black gaze.

Although the books Beloved (1987) and Sula (1973) have been credited for Morrison’s metaphorical use of water, two of her novels directly reference the sea. Song of Solomon (1977), Morrison’s third novel, presents the story of Macon “Milkman” Dead, a young Michigan man searching for his family’s truth, which takes him on an odyssey-like journey. Rumor has it that his ancestor, Solomon, had the ability to fly. Morrison nods to African folklore, which imagines bodies flying away to escape enslavement, the sea being a barrier between the American plantation and their native Africa. Milkman’s ability to return to his roots stands in contrast with the majority of the Black townspeople, who are not as wealthy and educated as Milkman’s family. The townspeople’s desire to live near the coast illustrates their collective longing for the sea and for their homeland.

In Tar Baby (1987), Caribbean and island culture provide a backdrop, as the main characters move about the sea. The novel opens with Son, a black sailor who jumps feet-first into the sea one night. The scene is harrowing, as Son battles a vortex underneath the surface of the dark water. Son’s dark skin is able to blend in with the water. The depiction is an allusion to the relationship the Black body has had with the sea, where many Africans perished during the Middle Passage. Son eventually finds himself on an island and at the home of a white family. He begins a relationship with Jadine, the niece of the house servants. But after the two leave the island for New York, and then Florida, their love affair takes a violent turn. In the very end, Jadine chooses Paris over her island homestead, while Son finds himself on L’Arbe de la Croix, an island of slave descendants.

Although Morrison is known for her fiction and essays, she also published a short poetry collection, Five Poems (2002). In “I am Not Seaworthy,” Morrison writes from the first-person perspective of a person who rejects the sea and desires their ancestral land—another allusion to Black bodies displaced during the Middle Passage.

Chen, Gengqing and Weiwei Wang. “Metaphorical Analysis of the Image of Water in Beloved.” International Journal of English Linguistics, vol. 4, no. 4, 2014, pp. 93-98.