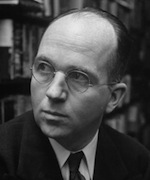 MICHENER, JAMES A[LBERT]. (1907-1997). Prolific novelist James A. Michener was rescued as a foundling by a widow living in Doylestown, Pennsylvania. Years later, having taught high school and college, Michener found his nascent career as a textbook editor interrupted by World War II, an experience that altered his life dramatically. As a member of the Naval Reserve, he was posted to the Pacific and ultimately set foot on dozens of its islands, providing him with material for his first and perhaps most satisfying work, Tales of the South Pacific (1947).

Tales of the South Pacific is a series of nineteen episodes dealing with the American experience in the Pacific theater of World War II; the book dramatizes the war’s impact on Americans and islanders alike. Narrated by a colorless naval functionary, the episodes are set in the New Hebrides, New Caledonia, the Solomon Islands, and Norfolk Island, home of descendants of the Bounty mutineers. Only as the book unfolds does it become clear that its plot is building toward an Allied assault, Operation Alligator, on a Japanese-held island. Recurring character Tony Fry, a thoughtful navy lieutenant who will ultimately die in the assault, is implicitly contrasted with Bill Harbison, an extroverted officer whose oft-stated desire for “action” wanes when the assault eventually takes place.

Tales of the South Pacific received the Pulitzer Prize, but its reincarnation as the immensely popular Rodgers and Hammerstein musical South Pacific (1949) led to Michener’s fame and made it possible for him to devote the rest of his life to writing. The romantic musical was based on only two of the book’s episodes, however, and falsified its generally realistic tone.

Michener followed Tales of the South Pacific with other volumes about the Pacific world. These included Return to Paradise (1951), essays and stories growing out of his own return to the islands after the war, and Rascals in Paradise (1957, written with A. Grove Day), biographical sketches of ten colorful Pacific interlopers, including Captain William Bligh of the Bounty. Michener’s interest in the Pacific culminated in Hawaii (1959), a lengthy chronicle that carries the islands from their creation in volcanic upheaval, through their peopling by Polynesians, American missionaries, and Chinese and Japanese peasants, to the brink of statehood. The novel includes several highly evocative accounts of life at sea but also exhibits what would become an increasing willingness to sacrifice character development to the demands of historical structure. It was made into a motion picture starring Max von Sydow, Julie Andrews, and Richard Harris in 1966.

Michener went on to write about other parts of the globe in equally epic fashion. In Caribbean (1989) he dramatized the history of yet another island world, this time in overtly episodic fashion.