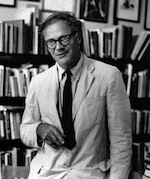 LOWELL, ROBERT, JR [TRAILL SPENCE]. (1917-1977). Robert Lowell, the son of a naval officer, recalled in the poem, “Commander Lowell: 1887-1950” (Life Studies, 1959) how his father, in his postnaval life, would boom “Anchors Aweigh” in the bathtub and would frequent the Sunday Yacht Club and the Maritime Museum at Salem, Massachusetts. His mother’s death is remembered in “Sailing Home from Rapallo: February 1954” (Life Studies), a description of his ocean voyage while accompanying his mother’s body from Italy to the United States. His sonnet “To Margaret Fuller Drowned” (1967) is a tribute to that writer, who was drowned with her husband and child.

In 1946 Lowell published Lord Weary’s Castle, a collection of poems that includes “The Quaker Graveyard in Nantucket,” an elegy written to commemorate Lowell’s cousin, Warren Winslow, whose naval vessel disappeared during World War II. Often compared to John Milton’s “Lycidas,” “The Quaker Graveyard” evokes a graphic image of a drowned sailor caught in the dragnet of the ship before the corpse is weighted and once more consigned to the deep. Replete with literary allusions, the poem uses Melvillean references to Ahab and the Pequod to depict the gory violence with which Nantucket Quakers captured and processed whales. Ultimately, however, human beings are powerless against the spewing Atlantic, which is engorged with dead sailors. “The Drunken Fisherman,” also from Lord Weary’s Castle, alludes to the spout of the sperm whale and the whale’s fury.

Another key maritime influence was the Maine coastal town of Castine, where Lowell and his second wife, author and critic Elizabeth Hardwick, spent many summers. In “Castine Harbor” (1967), the ocean, a mix of hydrogen and oxygen in Lowell’s poetic vision, becomes a symbol for marriage. “Castine 1860” (1970) evokes American watercolorist Fitz Hugh Lane’s painting a ship in Castine harbor not far from Lowell’s barn. In “No Hearing,” Lowell watches the frothing breakers and the steamer the State of Maine, the training ship for the Maine Maritime Academy in Castine, in dry dock. In 1965 Lowell spent the summer in Castine and wrote “Waking Early Sunday Morning,” “Fourth of July in Maine,” and “Near the Ocean” (Near the Ocean, 1967). “Water,” from For the Union Dead (1964), describes the granite shore of a nearby lobster town.

The Dolphin, a collection of confessional verse, was published in 1973 and won a Pulitzer Prize in 1974. Dolphin, mermaid, and fishing images permeate the autobiographical content of the poems. Lowell’s dramatic adaptation of Herman Melville’s tale “Benito Cereno” (The Old Glory, 1964) won an Obie award for the best off-Broadway play. Among his translations is The Voyage and Other Versions of Poems by Baudelaire (1968).