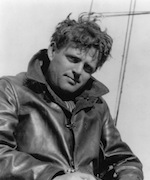 LONDON, JACK (1876-1916). Born John Griffith Chaney in San Francisco in 1876, Jack London was deserted by his father and raised in Oakland by his mother and his stepfather, whose surname he adopted. London worked at many jobs as a teenager in order to buy a sloop for oyster pirating in San Francisco Bay. He switched to the other side of the law when he joined the fish patrol. London’s youthful exploits provide the basis for two juvenile works: The Cruise of the Dazzler (1902) and Tales of the Fish Patrol (1905).

Although better known for his Klondike fiction, London was a prolific writer of American seafaring fiction and nonfiction. Like his Northland writings, London’s sea literature is rooted both in broad personal experience as a sailor and in extensive research on navigation. An avid reader of the seafaring works of James Fenimore Cooper, Richard Henry Dana Jr., Frederick Marryat, Robert Louis Stevenson, Stephen Crane, and Frank Norris, London was most strongly influenced by Herman Melville, Dana, Joshua Slocum, and Joseph Conrad. He was reading Typee (1846) and Moby-Dick (1851) at a time when Melville’s writing had fallen from favor. London’s sea writings generally sustain the tradition of his literary antecedents; however, he incorporates such varied concerns as social Darwinism, imperialism, environmentalism, socialism, naturalism, and gender and racial issues, thus producing a unique blend of seafaring adventure, brisk narrative, and ideology.

At seventeen, London signed on as a sailor aboard the Sophia Sutherland, a three-masted sealing schooner headed for Asia and the Bonin Islands. During this voyage, London plunged into the brutal, but exhilarating, realities of seafaring life. His tenure on the Sophia Sutherland satisfied his yearnings for travel and adventure as well as providing a basis for later writing. While at sea, London experienced a typhoon that became the subject of a prizewinning sketch, “Story of a Typhoon off the Coast of Japan” (1893). This early narrative, published in a San Francisco newspaper, revealed the powerful intermingling of sensory detail and human emotion typical of London’s later writing.

Unable to find work after returning from this voyage, London tramped across the country. He was jailed for vagrancy in Buffalo. Once he returned to California in 1898, he joined other gold-seekers in boarding ship for the Klondike. Although London found little gold, he gathered substantial raw material for a successful writing career. Capitalizing on his Klondike experience, London published The Son of the Wolf (l900), The God of His Fathers (1901), Children of the Frost (1902), A Daughter of the Snows (1902), and The Call of the Wild (1903) and White Fang (1906).

Established in early adulthood as a writer of realistic and naturalistic fiction, London returned to seafaring as a subject in 1904 with The Sea-Wolf, a novel incorporating the Ghost, a microcosmic ship, an Ahab-like captain named Wolf Larsen, and a brutalized crew. Once again, London drew on his experiences aboard the Sophia Sutherland, but more influential were senior shipmates’ “yarns” as well as the published accounts of Captain Alexander McLean, London’s model for Larsen.

In The Sea-Wolf, London takes on the mythic Nietzschean Superman in Larsen, a brilliant, but sadistic, overreacher whose quest for revenge leads not only to his own alienation and disintegration but also to the abuse of his crew. The arrogantly masculine Larsen contrasts with the novel’s ultimate survivor, Humphrey Van Weyden, a sissified initiate into shipboard life who is transformed by hard work and exposure to challenging circumstances. London’s novel features sharply detailed images of seafaring life as well as the amoral individualism embraced by both captain and crew of the Ghost. Van Weyden and Larsen eventually clash over Maud Brewster, a refugee from a shipwreck. Larsen’s primitive ruthlessness contrasts with Van Weyden’s commitment to love, cooperation, and optimism. Through Van Weyden, London interjects his belief in the socialistic value of collective action as well as a more balanced model of masculinity. The Sea-Wolf, the subject of several cinematic productions, remains one of London’s most successful novels.

Success with The Sea-Wolf enabled London to devote more energy to socialist causes. From 1905 to 1909, his short stories, novels, journalism, and nonfiction recurrently advocated collective action over individualism. Notable during this phase is Martin Eden (1909), the story of a meagerly educated sailor driven to reinvent himself as a professional writer. Disillusioned by his literary success, Martin envisions escape to a South Seas paradise. En route, he succumbs to despair and commits suicide by plunging into the sea. Although Martin Eden cannot be classified as sea fiction, the sea plays a role in the hero’s consciousness.

During this phase of his own career, London also returned to the sea, albeit more optimistically. Between 1906 and 1907, Jack London oversaw construction of a fifty-five-foot, iron-keeled boat named the Snark, designed to carry him and his second wife, Charmian (generally considered to be the model for the fictional Maud Brewster), on a projected voyage around the world. To fund the $30,000 project, London offered to write a variety of articles for such major publications as Cosmopolitan and Collier’s. After seven years of planning, London and his crew set sail on 23 April 1907. As time permitted, London served as navigator. Throughout the eighteen-month voyage, the Snark was plagued by severe leakage, mechanical breakdown, illness, and crew problems; however, London was welcomed at stops in Hawai’i, the Marquesas, Tahiti, Bora Bora, Penduffin, and other South Seas ports. After contracting several tropical diseases, London was forced to end the voyage.

Despite his disappointment, London discovered that the Snark experience led to an important shift in his fictional concentration. Once attracted to the symbolic wilderness of the Northland, London redirected his attention to the South Seas. A youthful admirer of Melville’s Typee, London visited Nuka Hiva in the Marquesas Islands. Expecting paradise on earth, he was appalled by the devastating effects of white visitors and commercialism on the natives’ health and on the environment. Such stories as “Samuel” (1913), “The Terrible Solomons” (1910), and “The Heathen” (1909) reflect the consequences of white incursions into oceanic culture.

While on the Snark voyage, London was so profoundly affected by the spread of leprosy among South Seas islanders that he featured the disease in “Koolau, the Leper” (1909), “The Sheriff of Kona” (1909), and “Good-by, Jack” (1909). Sea writings that draw on the Snark voyage include Adventure (1911), South Seas Tales (1911), The Cruise of the Snark (1911), The House of Pride and Other Tales of Hawai’i (1912), and A Son of the Sun (1912). The novel The Mutiny of the Elsinore (1914) draws on London’s 1911 voyage from Baltimore to Seattle on the 3,000-ton, four-masted bark Dingo. Overall, these sea-based texts reflect London’s attempt to infuse nautical themes with his concern for human justice and environmental and cultural preservation.

London’s final years, from 1913 to his death in 1916, were beset by financial, personal, and health problems as well as disillusionment with American socialism. However, a 1915 voyage to Hawai’i restored both health and optimism. During his stay, he read the works of C. G. Jung, whose archetypal theories inform The Turtles of Tasman (1916) and On the Makaloa Mat (1919), which includes the notable short story “The Water Baby.” London also wrote two dog novels, Jerry of the Islands (1917) and Michael, Brother of Jerry (1917), which draw on his Hawaiian sailing experiences. London died on 22 November 1916; the exact cause of death is still debated. Such tropical diseases as yaws and dysentery probably contributed to the kidney failure, which was exacerbated by self-administered dosages of morphine, that ended his life at age forty.

First version of stories as published in magazines (multiple years)