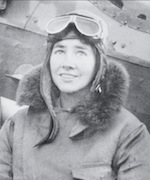 LINDBERGH, ANNE MORROW (1906-2001). Anne Morrow Lindbergh was born in 1906 in Englewood, New Jersey. Her father, Dwight Whitney Morrow, was ambassador to Mexico when Charles Lindbergh visited Mexico City in 1928, soon after he had completed his famous solo transatlantic crossing. Lindbergh and Anne Morrow met in Mexico City, and they married soon after her graduation from Smith College in 1929. Anne Lindbergh quickly developed the skills of an aviator and provided invaluable assistance to her husband in their explorations for new air travel routes. In the course of their voyages by seaplane, the Lindberghs visited many islands and developed a strong knowledge of the sea, which is particularly evident in one of Anne’s accounts of their travels, Listen! the Wind (1938). Generally a shy and reserved individual, Anne often found the stresses of the couple’s fame a challenge, one greatly heightened by the publicity surrounding the kidnapping and death of their first child and the ensuing trial two years later. She recounted these experiences in her five volumes of diaries and letters, covering 1922 to 1944.

Lindbergh found solace and escape in life outside the United States–in part on remote islands, particularly off the coast of Florida. Retreats in the early 1940s and especially in the spring of 1955 provided the foundation for her best-known work, Gift from the Sea (1955), in which she uses a similar visit to a beach to explore a woman’s relationships with others. Lindbergh found reflections of society’s problems in the sea and in seashells found at the beach, and she drew many of her insights from the ocean. Gift from the Sea spent eighty weeks on the best-seller list; after fifty-one weeks in the top slot, it was replaced by her collection of poems, The Unicorn and Other Poems (1956), a volume that includes a number of poems with a seaside setting. A good recent biography is Susan Hertog’s Anne Morrow Lindbergh: Her Life (1999).

This entry was posted in L and tagged 20th Century, Nonfiction, Poetry. Bookmark the permalink.