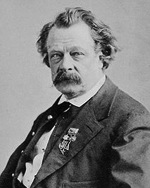 [JUDSON, EDWARD ZANE CARROLL], “NED BUNTLINE” (1823-1886). Edward Zane Carroll Judson, better known by his pseudonym Ned Buntline, was born on the Atlantic coast in Stamford, New York. The family moved to Bethany, Pennsylvania, and then to Philadelphia about the time Judson was a teenager. The docks of this port impressed him, and the feeling that he got the first day aboard ship would stay with him for the rest of his life. Running away to sea, he became a cabin boy for the U.S. Navy, then received his commission in 1838 for his efforts in a drowning rescue. His seagoing gave him the opportunity to explore New York, New Orleans, Charleston, the Caribbean, and many other ports.

At twenty-one he left the navy to fight in the Seminole War. Living in Cincinnati, Ohio, he established a magazine under the name “Ned Buntline.” His intense relationship with the sea determined his choice of name: buntlines are the lines attached to the bottom edges of square sails by which they could be hauled up for furling. This relationship is also responsible for the maritime theme in his writing. His years at sea provided him with material for his many eccentric picaresque stories and adventures. His first story, “The Captain’s Pig” (published in Cruisings, Afloat and Ashore, from the Private Log of Ned Buntline, 1848), was based on a real event; this story delighted readers with a comic narration of how the captain of his ship was ready to eat the pig he had brought on board, before Buntline tricked the captain and ate the pig himself.

Judson had some legal problems before settling in New York, where he became impressed with the port and its vessels. He would devote almost the rest of his life to writing dime novels, a narrative genre that he is credited with originating. These works were tales of violent action, usually written hastily and sold cheaply as serials, mostly centering on activities at sea.

Judson’s relationship with William Frederick Cody, better known as “Buffalo Bill,” whom he met during the Civil War, has frequently been overstated. Judson claimed to have invented Cody’s nickname and to have devoted his life to writing fiction and nonfiction about Cody’s deeds and about the rivers of the plains. The truth is that Judson wrote a mere dozen stories in which Buffalo Bill is the hero and that Cody had acquired his nickname before the two met.

Judson, however, did know rivers as deeply as he knew the sea and enjoyed fishing and traveling up the Hudson River on his own yacht. Many of the titles of his last books, such as The Naval Detective’s Chase; or, Nick, the Steeple Climber, a Thrilling Tale of Real Life, published posthumously in 1889, show that late in life he was still focusing on the sea. Judson’s rousing and sensational style has been compared to sea yarns of James Fenimore Cooper, Frederick Marryat, and pulp-fiction writers of his day, as well as to the showmanship and high jinks of P. T. Barnum. Other titles of note in his extensive canon, which today are possessed only by a few large libraries or by nostalgia buffs, include Elfrida, the Red Rover’s Daughter, a New Mystery of New York (1860), republished as Andros, the Free Rover; or, The Pirate’s Daughter (1883); The Shell-Hunter; or, An Ocean Love-Chase: A Romance of Love and Sea (1858); Harry Bluff, The Reefer; or, Love and Glory on the Sea (1890); Harry Halyard’s Ruin: A True Tale for the Intemperate to Read (c.1850-1870); and Long Tom Dart, the Tanker Privateer: A New Naval Story of the War of 1812 (1891).

“Ned Buntline” Cruisings, Afloat and Ashore, from the Private Log of Ned Buntline (1848)