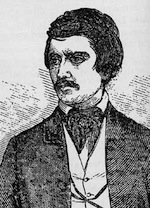 INGRAHAM, JOSEPH HOLT (1809-1860). Born in Portland, Maine, Joseph Holt Ingraham was a teacher, minister, and popular writer who produced more than 100 novels, 25 in 1845 alone at the peak of his career. Until the late 1840s Ingraham wrote popular historical romances, many about pirates and sea adventures. After his ordination in 1852 as a minister of the Episcopal Church, Ingraham turned his talents to writing biblically-based fiction.

Little is known about the early years of Ingraham’s life. Around 1826 he may have traveled to Buenos Aires, Argentina, on one of his grandfather’s merchant ships and worked for a time as a clerk. His novel Paul Perril, the Merchant’s Son (1847) may be a fictionalized account of his experience in South America.

Ingraham’s first book, the nonfiction travel narrative The South-West (1835), is based on his 1830 sea and river journey from New England to Natchez, Mississippi, by way of Bermuda, the Bahamas, Cuba, and New Orleans. This detailed work, directed toward an audience of northerners, chronicles his journey and offers a northerner’s perspective on the South. His first novel, Lafitte: The Pirate of the Gulf (1836), was tremendously popular; like several of his subsequent works, it was adapted into a stage production. Ingraham’s pirate tales and sea adventures include Captain Kyd; or, The Wizard of the Sea (1839), The Dancing Feather (1842), Morris Graeme; or, The Cruise of the Sea-Slipper (1843), The Midshipman; or, The Corvette and Brigantine (1844), The Spanish Galleon; or, The Pirate of the Mediterranean (1845), and The Lady of the Gulf: A Romance of the City and Seas (1846).

Although both his adventure and biblical novels sold well, Ingraham struggled financially throughout his life. He died at age fifty-one from an accidentally self-inflicted pistol wound.

The Midshipman; or, The Corvette and Brigantine (1845)

The Spanish Galleon; or, The Pirate of the Mediterranean (1845)

This entry was posted in I and tagged 19th Century, Caribbean, Fiction, First-person narrative, Merchant Marine, Nonfiction. Bookmark the permalink.