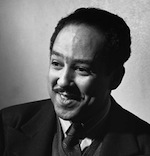 HUGHES, [JAMES MERCER] LANGSTON (1902-1967). Langston Hughes, the prolific African American writer whose work in multiple genres endeared him early in his career to the black American community and later to a broad, international readership, first prepared to set sail in 1922, when he signed on as a messboy aboard the freighter West Hassayampa. Hughes’ romantic vision of exploring the world as a sailor was shattered, however, when he discovered that the rusty ship he had climbed aboard was bound for nowhere. Towed up the Hudson River to Jones Point, where it was moored among a large group of decommissioned World War I freighters, the West Hassayampa merely served as a mother ship and quarters for a crew charged with maintaining the other idle freighters. Although Hughes found his first “experience at sea” somewhat embarrassing, life at Jones Point was nevertheless beneficial to his creative processes; he completed numerous poems, and the experience is humorously recaptured in the first volume of his autobiography, The Big Sea (1940). Armed with letters of recommendation from his superiors that testified to his abilities on shipboard, Hughes left Jones Point in 1923 and signed on to the West Hesseltine, bound for Africa. Hughes viewed this departure to sea symbolically: upon leaving the shore, he was also casting off painful memories of his past, such as his experiences with segregation at Columbia University, his many arguments with his father, the poverty of his childhood, and the day-to-day angers generated by racial prejudice. He was also leaving behind the romantic world of books, which had sustained him as a youth in lieu of actual experiences at sea. Fittingly, as the West Hesseltine moved past Sandy Hook on the New Jersey shore, Hughes cast overboard the books he had brought on the ship, saving, according to his biographer, only one: Walt Whitman’s Leaves of Grass (1855).

Hughes recaptured this and several other sea adventures in poems, short stories, and, most notably, The Big Sea, and his fascination with the sea provided material for a number of short stories and poems. In stories such as “Sailor Ashore” (1952) and “Powder-White Faces” (1952), for example, Hughes explored the psychological trauma of racial oppression that dogged black sailors both onshore and at sea. In such poems as “Sea Charm” (1921), “Rising Waters” (1925), “Sea Calm” (1926), “Death of an Old Seaman” (1926), “Fog” (1926), “To Captain Mulzac” (1943), and “Island” (1950), Hughes’ skills at rendering symbolism and metaphor from memories of his sea adventures attained their fullest power, transforming the sea into a canvas of words from which to explore themes of love, death, loneliness, sexuality, and racial identity and oppression.