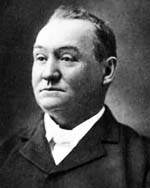 HERNE, JAMES A[HERN]. (1839-1901). James A. Herne was an actor, manager, and playwright whose early reputation as a successful melodramatist was established on the basis of his collaborations with playwright/producer/director David Belasco. Later in his career, however, he made a transition to a more realistic style, winning the approval of William Dean Howells. He has been hailed, perhaps overly enthusiastically, as the “American Ibsen” for his best-known play, Margaret Fleming (first perf. 1891; pub. 1917), which sensitively treats the issue of illegitimacy.

The sea figures prominently in four of Herne’s plays. The early Hearts of Oak (first perf. 1879 under the title Chums; pub. 1940) was written with Belasco and based closely on an English nautical melodrama, The Mariner’s Compass (1865). It is set on the coast near Marblehead, Massachusetts, and reworks a familiar melodramatic situation of two friends in love with the same woman. Phenomenally popular and much imitated, the play featured special effects, including a lively baby, a cat that stretched on cue, and a shipwreck. Drifting Apart (first perf. 1888; pub. 1940) deals with the havoc wrought by drink in the lives of a Gloucester fisherman and his wife. Originally titled Mary, the Fisherman’s Child, it is a temperance play enlivened by the addition of New England local color and an innovative dream sequence representing the death of the child by starvation. Before the revelation that the death has been a bad dream, the drunken fisherman, a role played by Herne, ships out aboard the Sprite and is shipwrecked and enslaved by Chinese pirates.

Early in 1889 Herne had started work on a play originally called The Hawthornes, which took on a new form and color after he spent a summer near Lamoine, Maine. When Shore Acres’ Subdivision (subsequently, Shore Acres) opened in 1892 (pub. 1928), it was set at Frenchman’s Bay near Bar Harbor and became a huge success for Herne. Partly inspired by the land boom in Maine, the action of the play entails the resistance of Uncle Nat, played by Herne in another starring role, to the sale of the family farm and the marrying off of his niece Helen to the man she loves. The scenes transpire on the farm, in the Berry Lighthouse, where Nat’s brother Martin is the keeper, and aboard the trawler Liddy Ann. Multiple backdrops display Frenchman’s Bay and Mount Desert Island and call for a catboat to be seen sailing lazily among the islands. The short third act shows Nat struggling to light the beacon in the lighthouse, followed by an extended silent scene of the Liddy Ann, with Helen aboard, making her way perilously near the rocks, with the light coming on just in time to guide her way.

The success of Shore Acres allowed Herne to build a home at Southampton, Long Island, and “indulge his taste for quiet, and for the sea,” according to his daughter Julie. Herne lived near the old whaling port of Sag Harbor, where he set the play of the same name, his last dramatic effort. Sag Harbor (first perf. 1899; pub. 1928) featured Herne as Cap’n Dan Marble, whose real-life model was the Gretchen‘s Captain Peterson, a scallop fisherman on Great Peconic Bay. More than any of Herne’s earlier plays, Sag Harbor is suffused with its seaside setting. In addition to Cap’n Dan Marble of the sloop Kacy, its central characters are mainly associated with the sea: William Turner, agent for the steamer Antelope; his son Ben, a boatbuilder; his younger son Frank, a naval seaman; ships’ carpenters; and Mrs. Russell, the ancient widow of an old whaling captain. A leisurely plot sets up the brothers as rivals for the same woman and ultimately marries off Cap’n Dan to a woman he has long courted. The play is largely set in a shipyard, showing Shelter Island and Gardiner’s Bay, North Haven, and Sag Harbor on a backdrop. The stern of the Kacy is onstage, and the opening talk is of boat repairs and scallop fishing. Mrs. Russell reminisces about when there were seventy whalers in the harbor and speaks knowledgeably of whaling. A third-act storm adds typical melodramatic action.

Though never quite escaping the confines of the genres in which he worked, Herne nonetheless advanced the cause of realism in treating maritime subjects and settings, which he used to raise important social issues. In his compassionate handling of troubled characters, he paves the way for Eugene O’Neill.