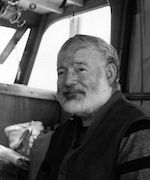 HEMINGWAY, ERNEST MILLER (1899-1961). Ernest Hemingway, winner of the Pulitzer Prize in fiction (1952) and the Nobel Prize in literature (1954), grew up in Oak Park, Illinois. Except when rough water forced them to go by train, he and his family crossed Lake Michigan every summer until 1917. In his teens, Ernest sometimes took a separate vessel with a friend; otherwise, he accompanied the family on the steamer Manitou to Little Traverse Bay at Petoskey, Michigan, en route to their cottage on Walloon Lake. His earliest story, “My First Sea Vouge,” was a sixth-grade exercise (1911) elaborating on a visit to Nantucket where his maternal grandfather had been a sea captain. In 1918, as a Red Cross officer bound for the Italian front on the French liner Chicago, he made the first of nearly forty ocean crossings.

On a return voyage from France through Havana in 1928, he discovered Key West. From then on, using an island by the Gulf Stream as his home base, first Key West (1928-1939) and then Cuba (1940-1960), he wrote mornings and fished afternoons when in residence.

In 1932, under the tutelage of Cuban commercial fisherman Carlos Guitierrez, he encountered marlin fishing in the Gulf Stream off Havana, “the great blue river” in the sea, as the Cubans call the stream, and fishing for marlin became a preoccupation. In 1934 he also began marlin and tuna fishing where the stream forks around the Bimini Islands in the Bahamas. That year he bought his own boat, the Pilar, named after a Spanish shrine and Hemingway’s pet term for his second wife. A thirty-eight-foot “Playmate” cabin cruiser from the Wheeler Shipyard in Brooklyn, customized into a fishing machine, she remains one of the world’s most publicized sportsfishing boats.

In December 1939 Hemingway moved to Cuba, beginning the longest sustained residence of his life. During World War II he interrupted his daily writing and fishing to embark on far riskier ocean ventures in the Pilar. Much of the time from June 1942 to March 1944, he was on authorized patrol north and east of Havana, hoping to report the location of German submarines. By 1960 his declining physical and mental condition, together with growing coldness between Castro and the United States, forced him to relocate to Ketchum, Idaho. On 15 April 1961, the American-assisted Bay of Pigs invasion of Cuba made it politically unlikely that he would ever again see either his library and unfinished manuscripts or the boat and Cuban sketches of the Gulf Stream so important to his creative imagination. On 21 April he made the first of several attempts on his life and on 2 July committed suicide in Ketchum.

In many of Hemingway’s short stories, beginning with “The End of Something” (1925), “Cat in the Rain” (1925), and “On the Quai at Smyrna” (1930), in eight of his nine novels, and in three works of creative nonfiction, marine or Great Lakes details comment on the relation between humanity and nature.

The sea is, arguably, a source of spiritual rejuvenation in Hemingway’s first novel, The Sun Also Rises (1926; film adaptation 1957). Sea episodes in the final chapter can be seen to reinforce the protagonist’s flagging, earlier sense of unity with nature on a river (ch. 12). For some, River to the Sea, a title Hemingway had considered for the book, shows his concern to stress the sequence, from inland water to the ocean, of a developing protagonist’s reassuring sensations of contact with natural order.

Transformations and/or transitions by inland water are important in Hemingway’s next novel, A Farewell to Arms (1929; film adaptations 1932, 1957). The title of his story “The Sea Change” (1931) derives from lines in The Tempest (1611); both story and play exploit ancient myths of the sea as a medium of magical change, viewed in the story as threatening. Water’s “strange” capacity to transform is portrayed affirmatively, with marine allusions, in the lake episodes of the story “Summer People” (c.1924, pub. 1972).

In “After the Storm” (1932), a pragmatic local fisherman describes his unsuccessful attempt to loot a submerged ocean liner, run aground near Key West in a hurricane. In the creative nonfiction work Green Hills of Africa (1935), the Gulf Stream in the Florida Strait objectifies nature’s abiding endurance (ch. 8). The main plot of the novel To Have and Have Not (1937) focuses on a Key West charter-boat captain’s ill-fated trips across the strait to Havana. In editing the anthology Men at War (1942), Hemingway included several descriptions of sea contests among the collection’s stark accounts of war.

Of Hemingway’s four novels composed after World War II, Across the River and into the Trees (1950; film adaptation 1987) was the first published and the first of three in which the sea is central. In the novel, set at the end of the war, an American colonel dying of a heart condition goes to Venice, a city seeming to rise out of the sea, to spend three final days with the love of his life, a precocious young Venetian heiress. He finds enchantment and spiritual rebirth in Venice, envisioning his beloved as Venus in Botticelli’s celebrated painting, rising out of the sea as do her surroundings. The colonel has three mystical experiences, each occurring as he observes the play of sunlight on the seawater of a canal reflected onto the ceiling of an ancient building. These epiphanies are thus a coefficient of the timeless sea and the enduring monuments of human effort, as is Venice itself.

An aged Cuban fisherman’s epiphany marks the thematic climax of The Old Man and the Sea (1952; film adaptation 1958): the moment when humanity and sea are in ultimate contact as the old man, Santiago, kills a huge marlin he has fought for two days in the Gulf Stream.

The novel Islands in the Stream (1970; film adaptation 1977), entitled and published posthumously, consists of three narratives about a painter of seascapes. In “Bimini,” he attempts to control remorse over failed marriages and struggles to capture the sea in his painting. In “Cuba,” depressed by the death of his sons and unable to paint, he searches obsessively for German submarines. In “At Sea,” however, while he is pursuing escaped German sailors, his intuitive observation of sea scenes partially frees him emotionally and creatively, shortly before he is fatally wounded.

In the posthumously published editorial condensation The Garden of Eden (1986), the novel’s opening mise-en-scene is a paradoxical merging of sea and land. Bordering a French seaside resort, a tidal canal runs inland to the city of Aigues Mortes, while next to the canal’s entrance a jetty projects into the Atlantic. A young American at the hotel with his bride hooks a sea bass at the juncture of canal, sea, and jetty. In an episode symbolically relevant to the couple’s cross-sexual role-playing, the fish runs out along the jetty to strain beyond its tip toward the open sea before being forced back to the base of the phallic structure and led into the adjacent canal. Later, thematically related diving and swimming scenes indicate the alienation of husband and wife while defining a superior balance of aggression and submission between the husband and a woman with whom he finds an idyllic symbiosis. Another swimming episode recalls the spirit of Santiago’s voyage and Hemingway’s Nobel acceptance remarks, as the lovers go out where neither has gone before and view the coastline from a perspective not seen by other swimmers.

Hemingway’s many journalistic articles on marine subjects are listed in the following bibliography. The revealing logs he kept of activities aboard the Pilar in 1934-1935 and 1936 are unpublished at this writing but may be examined at the JFK Presidential Library, Boston.

This animation of The Old Man and the Sea by Alexander Petrov (1999), is not only lovely, but instructive and thought-provoking in its interpretation: