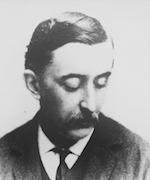 HEARN, [PATRICIO] LAFCADIO [TESSIMA CARLOS] (1850-1904). Lafcadio Hearn was born in Greece and migrated to the United States, where he drifted from New York, to Cincinnati, to New Orleans. In New Orleans he wrote Chita: A Memory of Last Island (1888), a fictionalized account of a hurricane in 1850 that decimated Ile Derniere, a resort island in the Gulf of Mexico. The sea’s moods, from destructive and death destroying, to calm, provide the tone and structure for the book, which first appeared serially in Harper’s Magazine.

Hearn then toured the Caribbean, settling for a while in Martinique, where he worked on stories about Americans in the tropics and Creoles emigrating to the north. Martinique Sketches (1890) includes such portraits of Caribbean life as “La Grande Anse” and “Les Porteuses,” as well as “Ti Canotie,” the story of Maximilien and Stephane, two boys who venture dangerously far out to sea in their canoe and are caught by a current that sweeps them from Martinique toward Dominica. By the time a passing steamer notices the canoe, Stephane has died. Hearn’s novel Youma (1890), written in Martinique, is the story of a slave girl who refuses to participate in a slave rebellion. Hearn subsequently published Two Years in the French West Indies (1890), a series of impressionistic essays about life in the Caribbean. In later life Hearn lived in Japan, where he became a noted collector of Asian folktales and published a number of books with Japanese subjects.

This entry was posted in H and tagged 19th Century, Caribbean, Fiction, Gulf of Mexico. Bookmark the permalink.