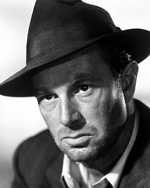 HAYDEN, STERLING [RELYEA WALTER] (1916-1986). Born in Upper Montclair, New Jersey, Sterling Hayden quit school at sixteen to join the crew of a sailing ship. He served as seaman aboard fishing vessels and sailing ships out of New England ports from 1932 to 1936, was first mate on Irving Johnson’s circumnavigation on the schooner Yankee (1936- 1938), became captain of the brigantine Florence Robinson out of Gloucester in 1938, and owned and captained ships out of eastern ports during the late 1930s and early 1940s. He served in the U.S. Marine Corps beginning in 1942 and acted in over fifty Hollywood films (Bahama Passage [1941] and The Eternal Sea [1955], as maritime titles).

Wanderer (1963) is the personal story of Sterling Hayden’s flight from Hollywood to sea and eventually to Tahiti on the schooner Wanderer. Although his account of the sea passage is interrupted by many asides about his life as a movie star and the custody battle over his four children, whom he took with him on the ocean voyage to the South Pacific, his maritime experience and his fine writing make Wanderer a meaningful story of seafaring as well as a story of escape.

Voyage: A Novel of 1896 (1976) is a re-creation of the days of the big wooden “down-easters” built on the coast of Maine in the final decades of the nineteenth century and early years of the twentieth. These vessels carried the bulk cargoes of the United States on the oceans of the world. Hayden takes advantage of the literary license of the 1970s to write dialogue using the gritty, uncensored language that was most likely spoken on those vessels eighty years earlier.