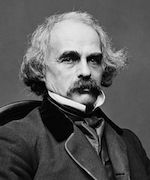 HAWTHORNE, NATHANIEL (1804-1864). Born in Salem, Massachusetts, when the town was still one of the most active seaports in America, Nathaniel Hawthorne spent most of his youth within sight of the town’s busy wharves. His grandfather, Daniel, had been a shipmaster and achieved minor distinction as a privateer during the Revolutionary War. Daniel’s two sons both went to sea: the older of the two, Nathaniel’s uncle, was lost at sea in the year of Hawthorne’s birth; the younger, Hawthorne’s father, died of yellow fever on a sea voyage four years later.

In his adult years, Hawthorne held three jobs that exposed him to many facets of the maritime world. As measurer of salt and coal at the Boston Custom House, he supervised the unloading of cargoes at Boston’s Long Wharf from January 1839 to January 1841. For more than three years, he served as surveyor of customs at the Salem Custom House (1846-1849). When his Bowdoin College friend Franklin Pierce was elected president of the United States in 1851, Hawthorne was rewarded for writing Pierce’s campaign biography with the consulship of Liverpool, where virtually all his responsibilities for the next four years involved activities of American maritime trade. His diplomatic correspondence during this period, as well as his personal notebooks and letters, include detailed commentary on issues and problems of the American merchant marine.

Hawthorne maintained friendships with a number of authors who had a close association with the sea. He edited Journal of an African Cruiser (1845) for his college classmate Horatio Bridge, who pursued a career in the navy. He responded enthusiastically to the publications of another college acquaintance, Henry Wadsworth Longfellow, whose lyrics, ballads, and narrative poems often reflect the influence of his youth in the seaport of Portland, Maine. His inspirational effect on Herman Melville during the period of the composition of Moby-Dick (1851) is suggested in Melville’s dedication of the book to him.

Despite these associations with the sea, Hawthorne’s tales, sketches, and romances make only scant reference to nautical themes and subjects. In his most sustained description of the sea’s influence, “Foot-prints on the Sea-shore” (1838), a young man drawn to the shore in search of solitude muses on the power and majesty of the sea. The apparent drowning of a sailor at sea figures prominently in “The Wives of the Dead” (1832). “Chippings with a Chisel” (1838) focuses on an elderly woman whose first love was killed by a whale forty years earlier. “The Custom House,” significant for its role in introducing some of the themes of The Scarlet Letter (1850), is also a vivid portrait of a mid-nineteenth-century seaport in decline. Less central references in The Scarlet Letter include the location of Hester’s cottage by the sea and the appearance of a sea captain in the final chapters. A sea captain also has a minor role in “Night Sketches” (1838). In “Drowne’s Wooden Image” (1844), a sea captain’s request for a figurehead for his ship inspires an ordinary carver to temporary artistic heights.

This entry was posted in H and tagged 19th Century, Coastal Life, Fiction. Bookmark the permalink.