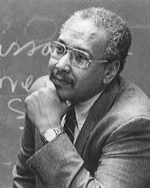 HARPER, MICHAEL S[TEVEN]. (1938-2016). Few of Michael S. Harper’s challenging poems draw upon the sea for either setting or theme, but when his strong interest in history intersected with even stronger feelings about racial justice, he infrequently employed sea imagery for thematic impact. For example, one of his most quietly dramatic works, simply titled “American History” (1970), through deft allusion compares the Birmingham church bombing that killed four little girls in the early 1960s with the unconscionable cruelty of the slave trade. His image of several hundred black slaves submerged “in a net, under water,” whether historically true or artistically imagined, resonates timelessly with the same moral outrage of more recent murders. With “The White Whale,” also from the 1970 Coltrane collection, Harper co-opts Herman Melville’s presumed symbol of evil for one more modern, yet equally subtle and specific, application. In that same volume “Lookout Point: U.S.S. San Francisco” invites comparison with Robert Hayden’s “Veracruz” (1962), both introspective imaginings prompted by seascape description and revery.

Both past and recent history figure in later poems dealing indirectly with sea themes. Harper’s visit to Bristol, England, in the 1970s inspired his “Bicentenary Remembrance of Trade” (1977) in the British seaport during the nineteenth century. Later, as poet laureate of Rhode Island (1988- 1993), he wrote a piece to commemorate the launching of a nuclear submarine christened after his home state. In the latter poem, formally titled “Rhode Island (SSBNT740): A Toast” (1993), Harper correlated the uncommon common majesties of sleek technology, unseen seascape, and the “zone of freedom” that depend on such military machinery and its dedicated crew.

This entry was posted in H and tagged 20th Century, Poetry. Bookmark the permalink.