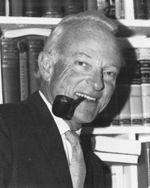 HALL, LAWRENCE SARGENT (1915-1993). Lawrence Sargent Hall was born in Haverhill, Massachusetts. Following completion of his Ph.D. at Yale University in 1941, he served for four years as an officer in the U.S. Navy, including three years of sea duty. In 1946 Hall took a teaching position at his undergraduate alma mater, Bowdoin College, Brunswick, Maine, where he was to remain until his retirement in 1986. While at Bowdoin, he resided at Orr’s Island, the setting for Harriet Beecher Stowe’s The Pearl of Orr’s Island (1862), where he operated a boatyard for some years.

Hall’s short story “The Ledge” (1959) was awarded first place in the 1960 O. Henry commpetition. Its principal character, a fisherman overconfident of his seagoing skills, commits a foolish and fatal blunder during a winter hunt for sea ducks on the outer ledges of the coast, resulting in the drowning of the fisherman, his son, and his nephew.

Hall’s only novel, Stowaway (1961), takes place on a World War II freighter named Belle, used as a liberty ship delivering supplies in escorted convoys to England. The disillusioned crew on this derelict vessel, outcasts of a war they didn’t want to be involved in, wander aimlessly at war’s end from port to port, eventually falling into a drunken lethargy on the open sea on a purposeless voyage to Australia. Their revolt against an irrational and dissolute authority, said to be in the name of human solidarity, reflects the influence of Joseph Conrad on Hall.

In 1962 Hall sailed down the Mississippi River in a Grand Banks dory. His account of this experience appeared in articles he published in three consecutive issues of the magazine The Skipper (November 1964-January 1965).