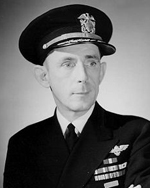 GALLERY, DANIEL V[INCENT]. (1901-1977). Admiral Daniel V. Gallery, termed a “true original” by his friend Herman Wouk, was a brilliant career naval officer who published widely both during and after his naval duty. A 1920 Naval Academy graduate, Gallery first served on battleships and later volunteered for naval aviation. At the outbreak of World War II, he commanded an Icelandic antisubmarine base; in 1943 he directed the boarding and capture of the German submarine U-505 on the high seas while commanding the antisubmarine carrier Guadalcanal and her task group, the first American capture of an enemy warship on the high seas since the War of 1812.

At the end of the war, while serving in the Pentagon from 1946 to 1949, Gallery began writing. He described the U-505 episode and the Iceland duty in articles for the Saturday Evening Post, he wrote humorous short stories for the Post and other magazines; and he penned several articles on important naval subjects of the day. An official document, the fabled “Gallery Memorandum,” which leaked to the pen of journalist Drew Pearson, played a minor role in the 1949 “revolt of the admirals” about the planned denigration of naval aviation.

Gallery retired from the navy in 1960. His collected short stories, Now Hear This (1965) and Stand By-y-y to Start Engines (1966), were successful enough to encourage Gallery to write two short “epics” about his favorite main character, the best of which was titled Cap’n Fatso (1969). A comic figure without much depth, Fatso nevertheless possesses the ingenuity, bravado, and enlisted “wisdom” to make him an ideal vehicle for Gallery’s wit. Fatso shared with Gallery a deep knowledge of navy prerogatives and a refined ability to get around the regulations.

Noteworthy among Gallery’s other books are his polemic, The Pueblo Incident (1970), and his engaging autobiography, Eight Bells and All’s Well (1965).