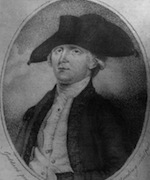 FANNING, EDMUND (1769-1841). Captain Edmund Fanning of Stonington, Connecticut, was the younger brother of naval officer Nathaniel Fanning. In a memorial to the U.S. Congress in 1833, Edmund Fanning urged the legislature to support funding for an exploring expedition to the high southern latitudes and the Pacific Ocean. He gave vent to the patriotic sentiment that for the past thirty-three years he had engaged in trade with China and various Pacific islands for the benefit of the nation. He affirmed that his exertions initiated the extremely lucrative development of trade with China, whereby fur-seal skins, beche-de-mer, sandalwood, mother-of-pearl, and other commodities were obtained from the islands of the Pacific and South Atlantic. He petitioned Congress so earnestly because the 1830s saw a radical decline in seal populations, as the rookeries at Juan Fernandez Island, Masafuera, the Falkland Islands, and other regions of fur-seal resort had been heavily exploited.

Fanning was something of a pioneer. Not only was he engaged in the seal fishery and the China trade at an early date, but he wrote books about it. In the opening paragraphs of his first book, Voyages round the World; with Selected Sketches of Voyages to the South Seas, North and South Pacific Oceans, China, etc . . . 1792-1832 (l833), he describes his first sealing voyage in 1792 as promising an auspicious beginning, which idea, as soon becomes apparent, was mistaken, as there were few people available with any experience in the seal fisheries of the South Atlantic. While this first voyage was not a particular success, his subsequent efforts became landmarks in sealing history. By 1797, when he commanded the brig Betsey, of New York, he had gained such experience in the fur-seal fishery and the China trade that the voyage cleared $52,000 in profit.

Fanning was among the first to publish voyage narratives regarding these aspects of the China trade. He wrote two books, the first dealing with his early voyages and sealing experiences. The second, Voyages to the South Seas, Indian and Pacific Oceans, China, North-west Coast, Feejee Islands, South Shetlands, &c. &c . . . 1830-1837 (1838), includes historical material such as a narrative description of the massacre in 1811 of the crew of the ship Tonquin, Lieutenant Jonathan Thorn, U.S. Navy, master, by the native peoples of Vancouver Island on the Northwest Coast. He also includes a description of American whaling, detailing the cutting-in and trying-out of right whales. He discusses the discovery of some small islands in the Pacific, one of which, Fanning Island, located at 3 degrees 51 minutes north, 159 degrees 12 minutes west, about 1,200 miles south of Hawai’i, still bears his name. He gives good accounts of the particulars of trade with the Fiji Islanders and the curiosities, dangers, ethnographic observations, and other features of importance to future traders with these people.

The importance of Fanning’s voyages and writings is reflected in his influence upon such mariners as Captain Nathaniel B. Palmer, for whom Palmer’s Land in Antarctica is named; Captain Benjamin Pendleton, who commanded the exploring expedition that ended ignominiously in mutiny upon the Araucanian coast in the late summer of 1830; and Charles Wilkes, who was to command the very successful and important U.S. Exploring Expedition of 1838 to 1842. Fanning was able to convince Congress of the importance of his ideas, which speaks to his authoritative knowledge of the position of the United States in the maritime merchant trade at the turn of the eighteenth century and the early years of the nineteenth.

Voyages round the World; with Selected Sketches of Voyages to the South Seas, North and South Pacific Oceans, China, etc… (1833)