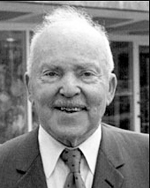 EBERHART, RICHARD [GHORMLEY] (1904-2005). Richard Eberhart is the author of some twenty-six volumes of poetry, from A Bravery of Earth (1930), to Maine Poems (1989). Throughout his career he has utilized nautical images and themes, many of which derive from his immediate experience of the sea. A precise observer for whom the natural world offers moral lessons, Eberhart often uses the sea to represent human powerlessness in the face of natural forces. In his first, largely autobiographical volume, for example, his experience in 1927 as a deckhand on freighters crossing the Pacific heightens his sense of the paradoxical loneliness and exhilaration of life at sea. In the sonnet “Fear of Death by Water” (The Long Reach [1984]), he writes that the sight of a bay filled with boats “Argues that man controls the ocean,” but that this isn’t really the case, and that poems will not save one from drowning.

Later in his career, his experiences as the owner of the thirty-six-foot sailing cruiser Reve on the coast of Maine supply the settings and substance for much of his poetry. He owned a cottage at Undercliff on the Penobscot Bay and often took fellow poets sailing. “How to Make Something of the Rocks,” “Sea Bells,” “Sea Storm,” “Fog I” and “Fog II” (there are two sequences with these titles), and a host of other poems from The Long Reach that also appear in Maine Poems continue to use Eberhart’s straightforward perception of the sea as a powerful force and a compelling image for the expression of moral concerns. “The implications of fog are enormous,” he reminds us in typical fashion in “Fog II.” The sea bell in “Sea Bells” tolls the ocean’s character, effects, and meaning, from silence, to repetition, to salvation. by Thomas R. Brooks (2000)