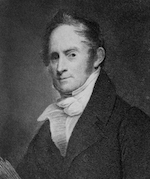 DUNLAP, WILLIAM (1766-1839). William Dunlap, born in Perth Amboy, New Jersey, showed considerable artistic aptitude at an early age and in 1784 was sent to England to study painting under Benjamin West. There, however, he became fascinated with the theater and, upon his arrival in New York three years later, soon abandoned his art career for the stage. He wrote, adapted, or translated between fifty and sixty-five plays, some of which are lost or misattributed. His later writings included histories and biographies, and he ultimately returned to painting.

His Yankee Chronology; or, Huzza for the Constitution! A Musical Interlude, in One Act. To Which Are Added, the Patriotic Songs of the Freedom of the Seas, and Yankee Tars (1812) was written to celebrate the naval victory of the American frigate Constitution over its English counterpart, Guerriere, earlier that year. This short musical drama begins with an American sailor, a veteran of that engagement, returning to his home and recounting the battle to his friends. The sailor sings several patriotic songs that Dunlap had actually written a few years earlier in reaction to the British impressment of American seamen. The production was a rousing success.

Of Dunlap’s numerous plays, which were mainly popular potboilers with European themes and scenes, Yankee Chronology is the only one to feature the sea or the Great Lakes, with one minor exception. His final play, A Trip to Niagara; or Travellers in America: A Farce (1830), uses Niagara Falls in the final scene, where an English tourist, heretofore anti-American, proclaims the greatness of the United States.

Significant collections of Dunlap’s manuscripts are held by the New York Public Library and Virginia Historical Society. by Robert Beasecker (2000)

His Yankee Chronology; or, Huzza for the Constitution! A Musical Interlude, in One Act. To Which Are Added, the Patriotic Songs of the Freedom of the Seas, and Yankee Tars (1812)