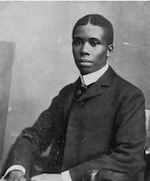 DUNBAR, PAUL LAURENCE (1872-1906). Best known for the dialect poetry suggested by the titles of his four published volumes, Paul Laurence Dunbar, the son of former slaves, also wrote a number of short stories and novels. His interest in the sea as a metaphorical medium is best exemplified in a half dozen of his celebratory poems, a subgenre perhaps justifiably ignored by most critics. While these works are typical neither of Dunbar’s major modes nor of his artistic successes, they do illustrate the ocean’s potential for mythic perspective in an active imagination.

Dunbar’s “Columbian Ode” (1896) patriotically celebrates man’s impulse toward discovery and his conquest of natural barriers. “The Mystic Sea” (1899) describes the inspirational mystique of the sea for its own sake; “On the Sea Wall” (1899) presents the ocean as both an avenue to the past and a resonator of the human heart. More lighthearted poems evoke joy, such as “A Sailor’s Song” (1899); others lament the sorrows of isolation or alienation, such as “Ships That Pass in the Night” (1895). The poet’s most “seaworthy” poem in terms of content and quality of verse portrays the sea as a natural phenomenon symbolically expressing the vagaries of the human condition. “The Wind and the Sea” (1896) may be one long exercise in psychological projection, but the close correlation between seascape and emotion transcends the triviality of other Dunbar poems of this ilk. If little else, Dunbar’s poetic canon further reveals the proclivity of so many poets for viewing the sea as both a source and an object of poetic perspectives.

The Complete Poems of Paul Laurence (1913)

Notable sea poems to search in The Complete Poems: