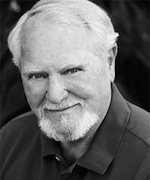 CUSSLER, CLIVE [ERIC] (1931-2020). As a boy Clive Cussler immersed himself in the literature of the American Civil War and the writings of C. S. Forester. Describing himself as “the kid that stared out the window,” he entered the air force after two years at Pasadena City College.

While creative director for an advertising agency in the early 1960s, Cussler began writing fiction. His initial idea was to write a series of books that continued the career of a single villain, but he had such success with his protagonist Dirk Pitt that the original project was abandoned. Pitt, who first appeared to the public in the Mediterranean Caper (pub. in 1973 as Mayday!), continued to appear as the central character in nearly a dozen more novels, including a revision of Pacific Vortex! (1982), the first Pitt novel actually written. Cussler’s breakthrough novel was Raise the Titanic! (1976), a work that in many ways anticipated the oceanographic discoveries of Woods Hole, Massachusetts, scientist Robert Ballard and that was adapted into film in 1980. The craftsmanship and tautness of this work were carried over into Vixen 03 (1978) and Night Probe! (1981), in which Dirk Pitt confronts an aging James Bond.

In his more recent novels, Cussler himself appears as a character, and his fictional agency NUMA (National Underwater & Marine Agency), of which Dirk Pitt was the special projects director, has assumed reality as the name of a group founded by Cussler to locate historical shipwrecks. His efforts in this area are chronicled in The Sea Hunters (with Craig Dirgo, 1996). Dirgo and Cussler also collaborated on a handbook to the fiction, Clive Cussler and Dirk Pitt Revealed (1998).

This entry was posted in C and tagged 20th Century, 21st Century, Fiction. Bookmark the permalink.