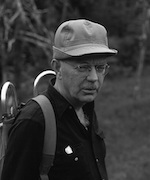 CALVIN, JACK (1901-1985). Jack Calvin was well acquainted with the Pacific coast from Monterey north. His first two novels, Square-Rigged (1929) and Fisherman 28 (1930), are based on his experience sailing from San Francisco to the Bering Sea. After leaving his position as a writing instructor at Stanford University, he and his wife, Sasha (Kashevaroff), the daughter of a Russian Orthodox bishop in Juneau, settled in Carmel, California. In the early 1930s they became members of a Monterey intellectual circle that included his former student, Ritchie Lovejoy (who married Sasha’s sister, Natalya), Carol and John Steinbeck, Joseph Campbell, and Edward F. Ricketts. Calvin described a trip that he and Sasha took in a seventeen-foot canoe from Tacoma up the inland passage to Juneau in an article published in the July 1933 issue of National Geographic.

In the summer of 1932, Ricketts and Campbell sailed with the Calvins on their thirty-three-foot boat, the Grampus, from Tacoma to Juneau on a marine specimen-collecting trip for a long-term project. Calvin collaborated on the literary aspects of the text and took photographs for Between Pacific Tides (1939), coauthored by Ricketts and Calvin, a classic work in ecology that achieved five editions by 1985, including those revised by Joel W. Hedgpeth and David W. Williams. In the mid-1930s the Calvins moved to Alaska, where Calvin wrote Sitka (1936), a history of that Russian settlement in Alaska, ran a printing business, and became an advocate of conservation and wilderness preservation.