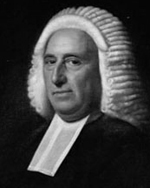 BYLES, MATHER (1707-1788). Congregational minister, sermonizer, and poet, Mather Byles was the grandson of Increase Mather. Among his publications are two notable volumes, Poems on Several Occasions (1744) and Poems. The Conflagration. . . The God of Tempest and Earthquake (1755). The first collection includes his major piece, “Hymn at Sea,” which was set to music by William Billings and published in the New England Psalm-Singer (1770). Addressed to the “Great God, thy Works our Wonders raise,” the hymn is in five numbered tetrameter quatrains dealing with such matters as day, night, tempest, calm-as the mariner follows his compass.

“The Conflagration,” which also appears in the first volume, is an early version of “The God of Tempest,” appearing in the second. Byles’ frequent sea imagery is particularly connected with storms at sea and relates these dark natural occurrences to the hand of God, signifying his wrath and judgment or, with their dissipation, signifying his benevolence. Two significant examples are “Old Ocean with presaging Horror rores” (“The Conflagration”).

This entry was posted in B and tagged 18th Century, Multimedia/Multimodal, Poetry. Bookmark the permalink.