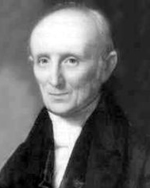 BOWDITCH, NATHANIEL (1773-1838). Mathematician, navigator, and astronomer, Nathaniel Bowditch authored the book that since 1802 has been the standard reference for celestial navigators worldwide. Schooled only to age ten, Bowditch taught himself mathematics and several foreign languages in the course of his academic pursuits. While on a voyage to Manila in 1796, Bowditch used his time to correct and supplement information contained in the standard navigation text of the day, John Hamilton Moore’s The Practical Navigator (London, 1772; first American ed. 1799). Bowditch published two updated editions of this work (1799, 1800) and then in 1802 released revised tables and instructions under his own name as The New American Practical Navigator. This reference immediately became the most frequently consulted text on the subject, selling 30,000 copies in ten editions during his lifetime; it is still in print today.

Bowditch further authored twenty-three scientific papers and an English translation of Pierre Simon de LaPlace’s Traite de Mecanique Celeste (five vols., 1798-1825; Bowditch’s trans., 1829-1839). As the secretary of Salem’s East India Marine Society, he transcribed and disseminated information contained in logs of voyages conducted by society members. The name Bowditch is still synonymous with scientific navigation instruction, bolstered by several biographies for juvenile readers, including Nut the Navigator (1870) and Carry on, Mr. Bowditch (1955). At his death, one eulogy stated that “every American ship crosses the ocean more safely for his labors.”

This entry was posted in B and tagged 18th Century, 19th Century, Children's Writing, Exploration, Nonfiction, Science/Nature. Bookmark the permalink.