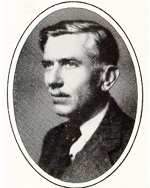 BISHOP, JOHN PEALE (1892-1944). A colleague and friend of such literary giants as F. Scott Fitzgerald, Edmond Wilson, Ernest Hemingway, Edna St. Vincent Millay, and Allen Tate, John Peale Bishop was a secondary figure in letters, writing essays, fiction, and poetry. He was a member of the Princeton circle that featured Wilson and Fitzgerald, was associated with the expatriate group in Paris that included Hemingway and Ezra Pound, and circulated with the Nashville agrarians. Remembered more for whom he knew than for what he wrote, Bishop’s place in literature has been partially resurrected since his death.

Bishop was born in Charleston, West Virginia, on 21 May 1892. As a youth he suffered from a psychosomatic illness but was able to attend Princeton, graduating in 1917. Green Fruit, his first volume of poetry, was published that year. He served in the U.S. Army in Europe in World War I and, returning to the States, became active in New York’s literary culture. From 1920 to 1922 Bishop was a contributing editor of Vanity Fair. Over the next dozen years, he traveled in Europe, worked in New York, and spent seven years in Ongeral, France. In 1933 Bishop returned to the United States, living first in Connecticut and New Orleans, then moving to an oceanside home on Cape Cod in 1938 that he named “Sea Change.”

Bishop turned to the sea for material and inspiration for his poems. Primary among his late poems was “A Subject of Sea Change” (1942), a despairing verse focusing on death. The parallel between the sea and death is striking in such later poems as “The Submarine Bed,” “Ghouls’ Wharf,” and “The Parallel” (all 1944), works that reflect Bishop’s seclusion overlooking the sea. He died 4 April 1944 at Hyannis, Massachusetts.

This entry was posted in B and tagged 20th Century, Fiction, Poetry. Bookmark the permalink.