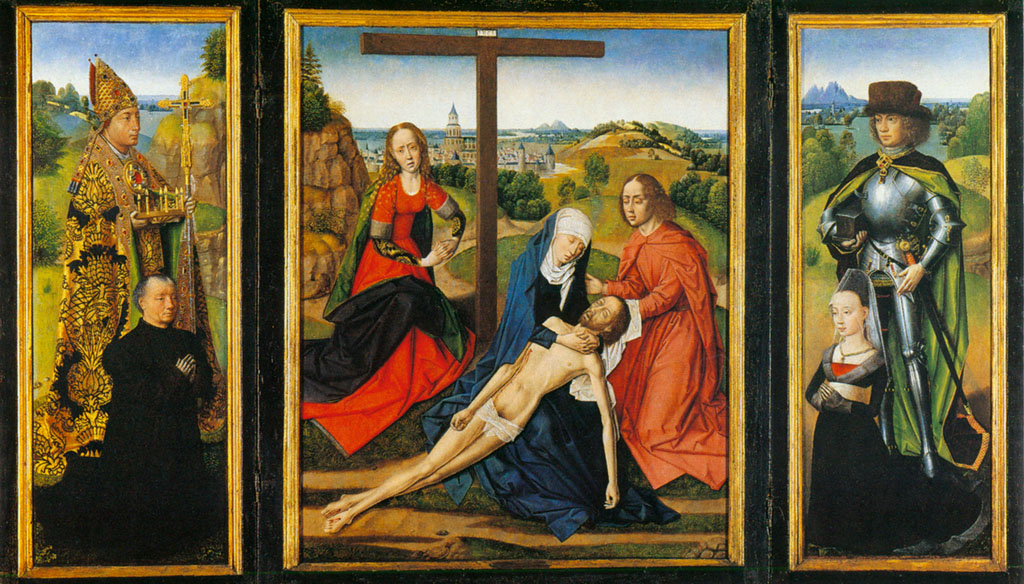 Master of the St. Lucy Legend.
Lamentation Triptych
with permission of
Museo Thyssen-Bornemisza, Madrid
The Lamentation triptych (ca. 1475), linked to the Master of the St. Lucy LegendThe Master of the St. Lucy Legend was an anonymous artist active in Bruges in the late 15th century, at the same time as Hans Memling, which implies shared patrons and mutual stylistic influence… by the pomegranate pattern worn by St. DonatianSt. Donatian, a Roman by birth, was the bishop of Rheims from 360 until his death in 390…, bears a connection to Obrecht’sJacob Obrecht was a South Netherlandish composer known mainly for his substantial output of Mass Ordinary settings in the late 15th century, as well as for his motets and songs… Mass(from Latin missa, “dismissed”) (1) Main service of Roman Catholic worship (2) Musical setting of the texts of the Ordinary of the Mass, usually the Kyrie, Gloria, Credo, Sanctus, and Agnus Dei for Saint Donatian in both its original location and its donors. Donaes de MoorDonaes de Moor belonged to the upper eschelon of the merchant class in Bruges… and Adriane de VosAdriane was one of five children of Jacob de Vos and Isabel van der Stichelen to reach adulthood… must have commissioned the altarpiece soon before 1481, when Donaes was banished for political reasons. It was one of many contributions they made to the Sint-JacobskerkIn Donaes de Moor’s and Adriane de Vos’s time, the Sint-Jacobskerk, dedicated to St. James the Apostle, was the most affluent of the parish churches in Bruges…, specifically to their own chapel dedicated to their patron saints St. Donatian and St. Adrian.

The central panel is closely modeled after the Lamentation of Christ by Dieric Bouts, with the only main differences being the Eyckian influence of the city of Jerusalem and landscape, the angle of Christ’s left arm, and Mary Magdalene’s lack of headdress. The underdrawing of the St. Lucy Master’s work even shows that the headdress was originally part of his plans.

Each of the two side panels shows one of the donors, paired with the appropriate patron saint and praying towards the center as if to gaze upon the scene of Christ and the saints. St. Donatian carries a wheel with candles, an attribute that refers to the legend in which the pope threw a wheel into the Tiber, bringing the drowned archbishop Donatian back to life. He also holds a processional cross that symbolizes the relics of St. Donatian kept in Bruges. St. Adrian’s attributes are a Burgundian jewel and an anvil, which symbolizes the torture he experienced after converting to Christianity. St. Donatian and St. Adrian stand in front of their own landscapes, distinguishing their setting from the Jerusalem of Christ, the Virgin, Mary Magdalene, and St. John the Evangelist. These panels once included the coat of arms of each donor, either when they were first painted or in memory of the donors, but they were removed much later (c. 1960). On the exterior of these panels, two grisailles depict St. Peter and St. Barbara as statues with key and tower, respectively. While the Master may have had help in painting the central and inner side panels, he probably created the grisailles himself.