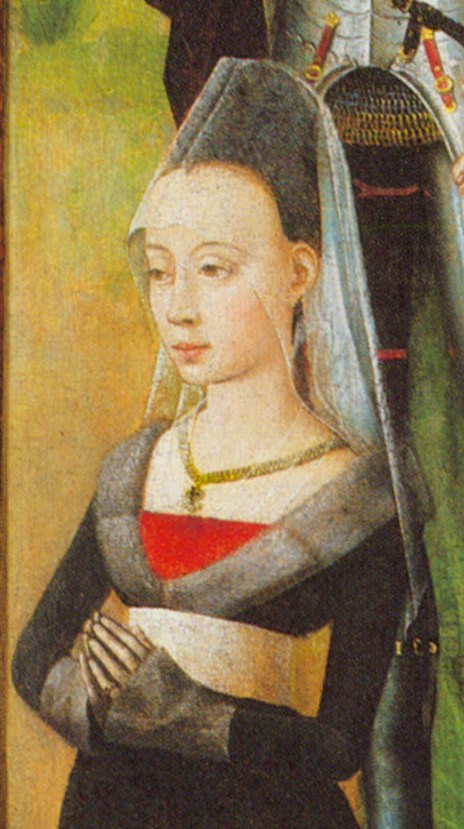 Adriane was one of five children of Jacob de Vos and Isabel van der Stichelen to reach adulthood. Her father Jacob, like his son-in-law Donaes de MoorDonaes de Moor belonged to the upper echelon of the merchant class in Bruges…, was a successful merchant active in city government, serving as alderman, treasurer, and chef-homme in Bruges. When she and Donaes married is not known, and there is no record of their having had any children.After her husband died in exile in Middelberg in the fall of 1483, Adriane petitioned and paid the town government for permission to bring his body back for burial in their parish church of Sint-JacobIn Donaes de Moor’s and Adriane de Vos’s time, the Sint-Jacobskerk, dedicated to St. James the Apostle, was the most affluent of the parish churches in Bruges…, where he was interred sometime before 1486. It was she who made the various endowments to the Sint-Jacobskerk to support the wishes expressed in her husband’s will, which included a daily low Mass(from Latin missa, “dismissed”) (1) Main service of Roman Catholic worship. (2) Musical setting of the texts of the Ordinary of the Mass, usually the Kyrie, Gloria, Credo, Sanctus, and Agnus Dei, two anniversary Masses, and two annual Masses “in discant” (that is to say “in polyphonyMusical texture consisting of two or more independent melodic lines, combined according to the practice of counterpoint”) on the feast days of their name saints. Adriane may well have approached the most well-known composer then active in Bruges, Jacob ObrechtJacob Obrecht was a South Netherlandish composer known mainly for his substantial output of Mass Ordinary settings in the late 15th century, as well as for his motets and songs…, to request the composition of a polyphonic Mass to commemorate her husband on the feast day of St. Donatian.St. Donatian, a Roman by birth, was the bishop of Rheims from 360 until his death in 390… What role she played in the selection of the special cantus firmia Latin term meaning “firm song,” applied to a previously existing melody, usually drawn from the chant or song repertories, used as the basis for a new polyphonic setting embedded in the Mass is unknown, but it appears likely that it was she who communicated to the composer her husband’s particular charitable concerns, so eloquently expressed by Obrecht in the Dutch song Gefft den armen found in Kyrie II—for Obrecht probably never knew Donaes, who died before the composer came to work in Bruges.

In the donor portrait painted by the Master of the St. Lucy LegendThe Master of the St. Lucy Legend was an anonymous artist active in Bruges in the late 15th century, at the same time as Hans Memling, which implies shared patrons and mutual stylistic influence… on the right wing of the Lamentation TriptychThe Lamentation triptych (ca. 1475), linked to the Master of the St. Lucy Legend by the pomegranate pattern worn by St. Donatian, bears a connection to Obrecht’s Mass for Saint Donatian in both its original location and its donors…, Adriane appears at least twenty years younger than her husband Donaes. She is slender, her skin has a youthful glow, and the hair peeking out from the edge of her headdress could be strawberry blond. Squirrel fur, a luxury only allowed the upper classes, trims her dark gown, and serves as an understated witness to her husband’s fur trade and their high social station. Her fashionably thinned eyebrows, long refined nose, and delicate full lips complete the impression of well-bred and well-off woman in the prime of life.

Adriane died on 22 March 1509, after more than twenty-five years of widowhood. If a polyphonic Mass in praise of her name saint Adrian was ever composed, by Obrecht or anyone else, it seems not to have survived.