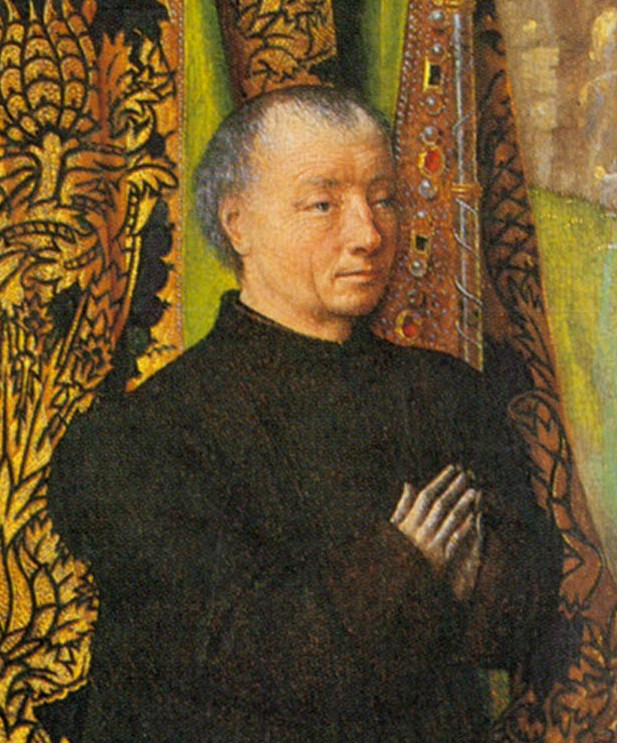 Master of the St. Lucy Legend.
Lamentation Triptych: Detail
with permission of
Museo Thyssen-Bornemisza, Madrid
Donaes de Moor belonged to the upper eschelon of the merchant class in Bruges. He made a fortune in the fur trade, and was a most active citizen of the city and generous parishioner at the Sint-JacobskerkIn Donaes de Moor’s and Adriane de Vos’s time, the Sint-Jacobskerk, dedicated to St. James the Apostle, was the most affluent of the parish churches in Bruges…. In addition to serving as dean of the guild of the furriers, his civic posts, spanning the period from 1447 to 1481, included alderman, chef-homme and treasurer of the city; he also was a “guardian” of the Hospice of St. Julian. Along with his wife, Adriane de VosAdriane was one of five children of Jacob de Vos and Isabel van der Stichelen to reach adulthood…, he founded an almshouse“Alms” were monies or goods donated, in the name of Christian charity, to support the poor; almshouses were residences built and endowed by private charity to house and maintain the poor, especially the elderly poor… for the care of the poor in 1480, and they lavished many gifts on the Sint-Jacobskerk, including chaplaincies, the choir stalls, and the painting for the high altar (believed by Albrecht Dürer to be the work of Hugo van der Goes). Especially important to the couple was the small chapel dedicated to their name saints, Donatian and Adrian, which they maintained behind the high altar in the Sint-Jacobskerk. For that private chapel they commissioned the Lamentation TriptychThe Lamentation triptych (ca. 1475), linked to the Master of the St. Lucy Legend by the pomegranate pattern worn by St. Donatian, bears a connection to Obrecht’s Mass for Saint Donatian in both its original location and its donors… by the Master of the St. Lucy LegendThe Master of the St. Lucy Legend was an anonymous artist active in Bruges in the late 15th century, at the same time as Hans Memling, which implies shared patrons and mutual stylistic influence… and donated stained glass windows, altar tables, and embroidered altarcloths. Last but not least, Donaes and Adriane endowed the performance of several liturgical services, some of which, like the Mass for St. Donatian, included polyphonicMusical texture consisting of two or more independent melodic lines, combined according to the practice of counterpoint. music.

On 13 May 1483 Donaes was sentenced to 50 years exile from Bruges, accused of collaborating with the future Emperor Maximilian against the local government then engaged in a revolt, instigated by the French, protesting Maximilian’s right to govern as regent after the death of his wife Mary of Burgundy in 1482. Less than four months later, on 9 September 1483, Donaes died in exile on his estate in Middelberg, Holland.

The donor portrait painted by the Master of the St. Lucy Legend on the left wing of the Lamentation Triptych reveals a man probably approaching 60, with close-cropped thinning grey hair and deep lines on his face. His firm mouth, strong nose and level gaze perhaps suggest a strength of character we might even today associate with a successful business man and civic leader.