In Donaes de Moor’sDonaes de Moor belonged to the upper eschelon of the merchant class in Bruges… and Adriane de Vos’sAdriane was one of five children of Jacob de Vos and Isabel van der Stichelen to reach adulthood… time, the Sint-Jacobskerk, dedicated to St. James the Apostle, was the most affluent of the parish churches in Bruges. The parish was founded around 1240 to serve an area of the city populated by merchants and aristocrats, and by the end of the 13th century, a new, single-nave, cruciform church with a central tower made of bluish-grey Tournai stone had replaced the small chapel of St. James built a century earlier. Today, four massive pillars in the north aisle mark the location of the original crossing and choir of the church, and the tower they support still identifies the church in the city skyline. 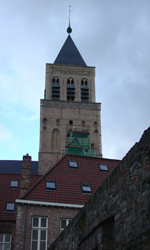 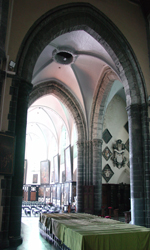 In 1459, an ambitious campaign to enlarge the church began, a reflection of the increasing wealth and prestige of its parishioners which by then included the household of the nearby Prinsenhof, where the Duke of Burgundy lived when in Bruges, as well as affluent merchants, bankers, and trade guildsmen. As shown in a plan of the church design made after the expansion, the original nave became the north aisle, and a new central nave, choir, and south aisle were added, as well as side chapels such as that founded by Donaes de Moor and his wife. 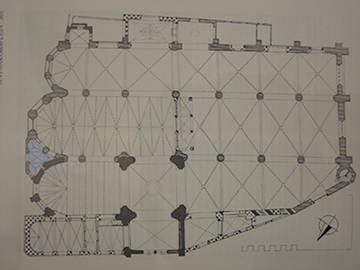 Parishioners lavished gifts on the church; Donaes and Adriane, for example, gave the choir stalls and the painting above the high altar. Today, our best impression of the interior of the Sint-Jacobskerk during this time can be gleaned from a painting of The Presentation of the Virgin in the Temple by the Bruges artist Pieter Claeissins the Elder (ca. 1500–1576), whose setting has been identified as the choir of the Sint-Jacobskerk before the destruction by the iconoclasts in 1580. 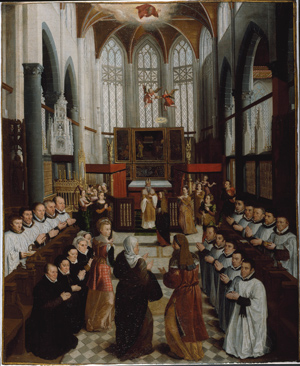 Pieter Claeissins the Elder
The Presentation of the Virgin in the Temple
With the permission of The Devonshire Collection, Chatsworth

The interior of the Sint-Jacobskerk was extensively remodelled in Baroque style during the late 17th and early 18th centuries; from this period date the marble high altar and rood screen, the black and white marble wall covering, as well as the oak pulpit and choir stalls. A visitor entering today is thus presented with a Baroque interior which preserves only remnants of the prosperous medieval church beloved by Donaes de Moor and Adriane de Vos. 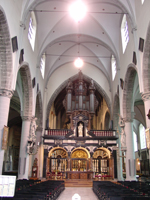 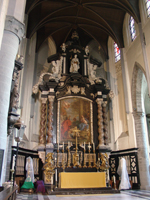