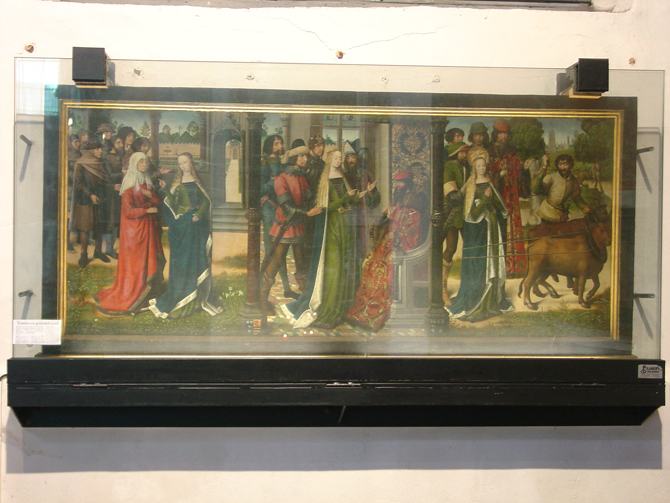 The Master of the St. Lucy Legend was an anonymous artist active in Bruges in the late 15th century, at the same time as Hans MemlingProbably born in the German town of Seligenstadt, the man sometimes identified as the painter of Obrecht’s portrait spent most of his life in Bruges, at the same time as the Master of the St. Lucy Legend…, which implies shared patrons and mutual stylistic influence. His name comes from a panel in the Sint-JacobskerkIn Donaes de Moor’s and Adriane de Vos’s time, the Sint-Jacobskerk, dedicated to St. James the Apostle, was the most affluent of the parish churches in Bruges… depicting the legend of St. Lucy (1480). About 25-35 other works have been ascribed to him based on similarity to that painting, identified by intricate detail in architecture, flora, and clothing. The Master’s well-known Mary, Queen of Heaven (ca. 1485/1500) has been a subject of significant musicological study, depicting angels engaging in historically accurate performance practices with detailed instruments and identifiable partbooks. This is only one example of his many devotional images to the Virgin and other central figures, which often have the city of Bruges in the background. In fact, the state of completion of the belfry tower’s remodeling in his paintings has helped art historians to assign dates to many of his works. Though he demonstrates the influence of Jan van Eyck, Rogier van der Weyden, Hugo van der Goes, Dieric Bouts, and Hans Memling, his eclectic style is also indebted to patrons in Spain, Italy, and Estonia.