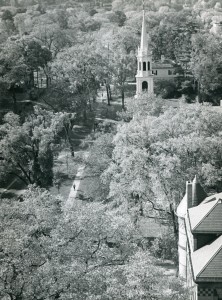 As many commentators and students have remarked, John William Miller’s thought resists scholarly pigeonholing and his writing eludes the reader in its deceptive simplicity. This is due in part to the fact that Miller wrote as a philosopher rather than as a scholar, eschewing annotation and the tracing of influences.  The resistance that his philosophy offers is also attributable to the relative novelty of both its form and its terminology. Particularly in the middle decades of the 20th century, this novelty seemed to doom his thought to obscurity as Miller wrote contrary to the major positivistic trend in Anglo-American thought. Yet today, when the historical and idealist bases of philosophical thought have been recouped, Miller’s philosophy strikes one as contemporary.

One place to begin when trying to understand a philosopher is with a listing of his influences. It is not easy to approach Miller in this fashion because he paid so little attention to scholarly apparatus in his writing and was inclined to be casual in his appropriation of the ideas of other thinkers. Yet, while strict lines of influence cannot be drawn, Miller’s own personal testimony and a review of his writing suggest a few connections that are worth attention. The whole idealist movement—beginning with Kant (and perhaps Vico) and including William E. Hocking (the director of Miller’s dissertation at Harvard)—was a profound source of inspiration. Within this lineage, Emerson, Fichte, Hegel, and Royce are particularly worthy of mention. Indeed, while Miller was a committed opponent of the airy universalism of the Absolute, he was equally committed to reason and reflective consciousness. Miller’s sympathy for twentieth century American thought was somewhat meager; the general drift toward positivism led him to be highly critical of his contemporaries. Of those who did not fall under the spell of Vienna, Hocking has already been mentioned and Susanne Langer can be added as an American philosopher who Miller appreciated. While he shared the pragmatists’ criticisms of positivism, Miller was inclined to interpret pragmatists (particularly James) as materialists. Miller was receptive to the pragmatist interest in action and found the idea to be highly amenable so long as it was interpreted in terms of reflection and not behavior. Indeed, Miller’s philosophy can be seen as a reconciliation of two important influences of his Harvard years—i.e., Jamesian pragmatism and Roycean idealism.

Miller’s philosophy is a hybrid. Initiated into the debate between realism and idealism, as well as the dispute between pragmatism and idealism, Miller consciously sought a middle route through these oppositions.  This via media is not, however, in any way a philosophical compromise. It is a synthesis and revision of those contesting positions.  As such, in his thinking Miller brings together and shows the mutual dependence of the real and the intellectual, the practical and the ideal, the finite and the universal, and action and infinity. Indeed, he referred to his position, somewhat paradoxically, as “historical idealism” and “naturalistic idealism.” The odd sound of these expressions and their manifest inner tension are ingredient to Miller’s philosophical stance and, furthermore, his larger conception of what thinking and being imply. For Miller, philosophy is not the means of removing strife but, rather, the recognition and thoughtful organization of conflict. “To philosophize,” Miller writes, “is to be in thoughtful control of a problem.”  One important way of describing his thinking, then, is to say that Miller’s philosophical synthesis does not effectively resolve the conflicts of his predecessors but shows the philosophical import of their disputes and the way in which their contests outline what must be ingredient in any worthwhile philosophy.  His conception defines philosophy as the activity of criticism in the Kantian sense of that term—i.e., to be aware of the conditions of one’s endeavors.

Links to two introductory essays on Miller’s philosophy are offered below.  Joseph P. Fell’s “Miller: The Man and His Philosophy” provides a general introduction to Miller’s thought—i.e., its bases, structure, and import.  Vincent M. Colapietro’s “Reason, Conflict, and Violence: John William Miller’s Conception of Philosophy” expands on Fell’s introduction by examining Miller’s sense of the matter of philosophy itself.

“Miller: The Man and His Philosophy,” by Joseph P. Fell