“Fantasy and Conversation” by Audre Lorde 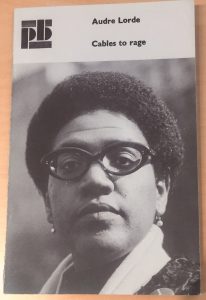 On the cover of the chapbook Cables to Rage by Audre Lorde, the viewer sees Lorde staring directly into the camera, her eyes taking on a defiant stance. With this picture, we are reminded of Lorde’s presence not only as a poet but as a feminist, a woman, a human being. Thus, for many women, Lorde is an example of the unwavering woman, something that Lorde’s poetry wishes to instill in its audience.

Cables to Rage features “Fantasy and Conversation,” a poem which presents witches in a positive light. The narrator of the poem speaks of “turn[ing] frogs into pearls / speak of love, our making and giving.”(19) Lorde explores the powers that witches commonly yield, and instead of these powers being forces of destruction and chaos, the poem creates a space where these powers are used to create love and healing within relationships. Through this poem, Lorde encourages her audience to see the power in their own lives, through their own craft. However, the poem highlights the dual nature of these powers. At the end of the poem, Lorde writes, “shall I strike / before our magic / turns color?” (19) While she is presenting witches and witchcraft in a positive light for the purposes of the feminist movement, Lorde also reminds her audience not to doubt their influence. Thus, she leaves her audience in the wake of the power of the witch, which also serves as a metaphor for the growing influence of the feminist movement as a whole.