The Lavender Menace Revolution and Lesbian Resistance in the Second Wave 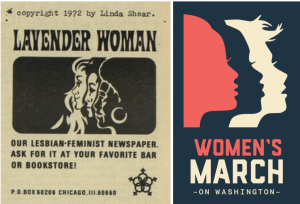 Cover art for the 1972 edition of Lavender Woman by Linda Shear. In the drawing, the women’s faces line up in a way that is almost interlocking, which depicts unity, and the hair of the woman on the left is the longest and reaches into negative space, creating a more dynamic image. There are similarities between this cover and the iconic image from the recent women’s march.

This exhibit is a collection of poetry, images, and historical texts that situate lesbians as an important voice in the Second Wave Feminist Movement, despite homophobia and censorship. Several of the works were created in response to a speech by Betty Friedan in which she alienated lesbians by calling them a “lavender menace.” By proclaiming lavender–a symbol associated with lesbians–a menace, Friedan suggested that lesbians would distract from the feminist movement. In response, radical lesbians reclaimed the label by calling themselves the Lavender Menace and protested the Second Congress to Unite Women on May 1, 1970. This group also shared the common link of lavender with a periodical titled Lavender Woman, which aimed to make space for lesbians by publishing articles and poetry centered around lesbian feminism and queer love. The works themselves in Lavender Woman are an act of rebellion. Cheryl Clark, for instance, echoes the theme of lesbian sexuality as a form of rebellion in her essay “Lesbianism: An Act of Resistance,” published in This Bridge Called My Back. This exhibition also examines Judy Grahn’s most prominent poem: “A Woman Is Talking to Death,” which destigmatizes and broadens perceptions of lesbian relationships.

Lavender Menace and the History of Lesbian Censorship

“A Woman is Talking to Death” and Destigmatizing Queer Relationships