Heresies, an independent feminist publication with a focus on art and politics, explores female spirituality in their fifth issue, The Great Goddess. The cover of the issue has an image of a Venus figurine, complete with exaggerated breasts and thighs, which were prevalent in representations from ancient pagan societies. Whatever their purpose may be, these figurines showcase how venerated women were in these societies; because of this, the cover encourages women to think of themselves in a similar fashion: as goddesses who are leaders of their community and nurturers of the family. However, 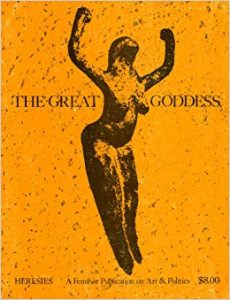 unlike typical American media that expected women to be devoted to their families, Heresies celebrates these roles, as they are a form of autonomy that women are able to have in the patriarchal society they are living in.

Additionally, the issue includes a glossary of different aspects of female spirituality, thus educating women on why they need to think of themselves as goddesses. Even though the issue focuses on goddesses as a subject of female spirituality, the glossary also includes terms relating to witchcraft and its components. Here, the audience can see a connection between the goddess and the witch: both figures are agents of healing, and possess powers that many do not. Cultivating this relationship between the two creates a community of women who can feel empowered by similarities between the goddess and the witch.