I’ll be honest: the first time I watched La La Land, I didn’t think about race at all. Not one bit. I was too engrossed in the plot of the film, in the conflict between ambition and love that drives the story. I was too distracted by the splendid patterns of colors dancing across the screen. I was too focused on the music and dancing for my mind to wander off and think about how Damian Chazelle chose to represent race and racial issues. I was so distracted from race that it seems Chazelle may have done it on purpose—that he purposefully chose to have the viewer focus on things other than race, that he chose to leave to race out of the film. On the surface, La La Land ignores issues of race—not once are racial issues explicitly spoken of or brought up in any way. At a time when more and more films have racial issues at the forefront, Chazelle put racial issues in the backseat and shone a spotlight on other aspects of modern life.

Due to historical notions of race, we often see race as an immutable trait each person possesses. I am white, for example, because I have (relatively) white skin. That I’m white, we often think, is a fact rooted in biology—rooted in my DNA. As Audrey and Brian Smedley argue, however, this is not the case. Race science, they claim, is bullshit. Rather than being biological, race is “…a folk idea, a culturally invented conception about human differences.” (Smedley). Our conceptions of race, they argue, are based not on scientific notions of the biological difference between two races, but on cultural understandings of the differences between people who look different. If this is the case, then we must be learning about these racial distinctions from our culture. Films (and books, music, etc.) must teach us about how we should understand race and racial differences. So even though La La Land appears to try so hard to ignore issues of race, maybe it is actually telling us something about those issues. Maybe its apparent ignorance is the message it is trying to send. Maybe I didn’t notice race in the film because it didn’t want me to.

Upon closer examination of the film, there is one specific area where race should play a significant role but doesn’t: Ryan Gosling and John Legend’s relationship with jazz as an art form. Gosling, a white man, wants to save jazz in its traditional form. “It’s dying,” he says, but “not on my watch.” On the other end of the spectrum sits Legend, who wants to push jazz forward and mix it with other kinds of music. “How are you going to save jazz if no one is listening?” he asks Gosling. “Jazz is dying because of people like you… You’re holding on to the past, while jazz is about the future.” What’s bizarre about this dichotomy is that the white man wants to preserve jazz (and all of its black roots), while the black man wants to push it forward. Usually we would suspect it to be the other way around. Greg Tate, a prominent black writer, noted that whites “…have always tried to erase the Black presence from whatever Black thing They took a shine too,” including jazz (Tate, 2-3). Usually, we would expect Gosling, not Legend, to want to push jazz forward (and thus erase the “Black presence” from it). La La Land flips the conventional racial script on its head—the white man is playing the black man’s role and vice versa. It undoes our usual racial conventions and produces an entirely new racial world as if to brag about how easy it was to do that.

While the battle between Gosling and Legend is the most prominent racial arena on the screen, race does appear in other parts of the film as well. The reason that we don’t notice it (or at least that I didn’t notice it) is because there is no racial struggle, no barrier to people of different races. In shot after shot after shot, we see whites, blacks, Latinos, Asians, and people of every other race coexisting in perfect harmony. Chazelle makes it apparent from the very beginning that different races can coexist—the opening number features people from every race dancing together atop unmoving cars on an L.A. highway. Later on the racial mixing continues at the Hollywood parties and at the jazz clubs—Chazelle even throws a mixed-race couple in for good measure (Gosling’s white sister has a black fiancé). Chazelle is not oblivious to the reality of modern life and the de facto segregation that exists in it; he actively chooses to show a world in which it doesn’t exist. Films can influence our perceptions of race, and Chazelle uses that to demonstrate to us that race really shouldn’t matter. La La Land removes (or flips, as in the case of Gosling and Legend) all of the usual racial barriers and differences, and I didn’t even notice, because I was too distracted by the rest of the film. Racial expectations can be changed because they are cultural, not biological, and the film expects us and wants us to subconsciously realize that. When you don’t think about race, as I didn’t, you realize that it shouldn’t matter.

There is one scene in the film that stands out for its purposeful removal of race. As Gosling and his love interest Emma Stone dance in the stars of a planetarium, they fade into silhouettes. However, “the bodies spinning obviously don’t belong to Gosling and Stone” (Decker). We can see that their identities get erased when they start dancing. We don’t know if they are black or white—they are silhouettes. Moreover, to Chazelle it shouldn’t matter what race they are, because race is just a cultural construct, one that can be undone, just as it was visually with two people fading into silhouettes on a screen. La La Land chooses to show race as unimportant because it wants viewers to realize that it is unimportant in the traditional sense. It doesn’t matter what race you are, or what race I am. Race is a set of ideas that we have created and that we can destroy. The film wants us to do just that. It uses the fact that race is cultural—the fact that our perceptions of race are shaped by culture—to show us that race is cultural and can thus be changed. 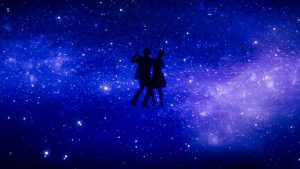 Even though I didn’t see race the first time I watched it, other (more attentive) viewers did. The #OscarsSoWhite campaign forced viewers to grapple with notions of race in a way they hadn’t previously, and thus La La Land received some attention for the seemingly small matters of race that did show up in the film. One common theme running through many of the criticisms can be summarized by the headline of the review in LA Weekly. “La La Land Is a Propaganda Film,” the headline claims, because Chazelle completely ignored the dimensions of race he should have focused on; he showed a world where the problems of marginalized nonwhite people are negated and white people are given advantages they do not deserve. The film was “a throwback to the 1950s without acknowledgment of how terrible the 1950s were for marginalized communities” (Wolfe). The issue I take with this view is that it operates on the understanding that Chazelle is “blind to the political power of film” (Wolfe), and is thus almost accidentally producing this world. Film criticism, though, generally rests on the assumption that filmmakers do know what they are doing—the whole purpose of analyzing films is to determine what the filmmakers want us to glean from them. If we are going to give Chazelle the benefit of the doubt (as we habitually do to every filmmaker) and assume that he knew the power of film, this leads us to the conclusion that he was purposefully showing us that race shouldn’t matter, because race is cultural. He’s not blind to the problems of marginalized communities, nor is he living in a post-racial fantasy land—he’s using the power of film to show that it is possible for us to fix those problems and reach that post-racial fantasy land should we forget our cultural notions of race. The racial world in La La Land is not a reflection of the real world, but a reflection of what Chazelle thinks the world can be.

All of this is not to say that La La Land is not racially problematic. It is.

Even though race shouldn’t matter, it still does, and it will for the foreseeable future. Audrey and Brian Smedley, the same writers who argued that race is cultural, still think it is important to address it: “although the term race is not useful as a biological construct, policymakers cannot avoid the fact that social race remains a significant predictor of which groups have greater access to societal goods and resources and which groups face barriers—both historically and in the contemporary context—to full inclusion.” (Smedley & Smedley). La La Land makes the mistake of assuming that just because race is cultural it doesn’t matter. It equates shouldn’t (as in race shouldn’t matter) with doesn’t (as in race doesn’t matter). Race is cultural and it does still matter, because we have assumed that it matters for so long that we have put roadblocks into society for nonwhite people. We can’t just forget our cultural notions of race to make racial divisions go away—it’s too late for that.

I’ll be honest again: I really enjoyed La La Land the first time I saw it, and I still do, even given its problematic racial conclusions. Just because films influence our racial understandings in a negative way does not mean they are inherently bad films. I can like La La Land and still comprehend that it has problems. If you liked La La Land too, that’s fine—you just need to be cognizant of how it is trying to get you to think about race and aware of whether you want to agree with it or not. You need to think this way with all films, because whether you realize it or not, they are influencing your perceptions of race, and those perceptions matter.

An earlier draft of this essay was read by Keith Penney.

I have written this essay in the style of Chuck Klosterman.

Tate, Greg, editor. Everything But the Burden: What White People Are Taking from Black Culture. Broadway Books, 2003.