The media’s representation of black men is anything but flattering: news covering black men continually depicts them as dangerous and out-of-control. Even as victims, their positions are often painted as suspicious to the point of being hostile against others. Police officers take part in this dominant view on black men with their perpetual confrontational encounters, which in this modern day almost inevitably leads to fatal endings. Due to the black working-class tradition of young, black boys escaping early boyhood into black masculinity, society’s understanding deems them as threats. This understanding elaborates the way a stereotypical leash restricts young black men who do not categorize into the white, bourgeois population. The benefit of the doubt given to those who do not share their melanin, but not themselves—a translation of the doubt placed on their characters due to their dissimilar skin tones—explains the scenarios that deem these young black boys as threats because of how their background has already forced them to understand and experience, and therefore become a part of, the adult world. Adult black men who are characterized as holding this predisposition to violence are rarely detached from this position in both the media and the culture industry. In general, black men are made compatible with violence in the minds of people. An experiment was conducted in order to analyze whether an individual’s race would determine the variation in effects of exposure to violent media information. Notably, “for Black defendants, participants exposed to violent information made attributions of his behavior that were more dispositional than those exposed to nonviolent information” (Johnson et al). While the media depicts these clichés and general beliefs rather vividly, cultural products often possess blatant undertones that remain unacknowledged. Supernatural, an American fantasy horror television series created in 2005, has obscure racially-biased aspects with its rare representations of black men within the show. Two of the relatively recurrent black characters that appear in the series—before and around season four—embody the stereotypically aggressive identity given to black men in the media. The stories of both Gordon Walker, a former vampire hunter, and Uriel, an angel, in the show can be analyzed to understand how the attached meanings to their biological features transfer to media.

Gordon Walker, at the age of eighteen, became a vampire hunter when a vampire broke into his home and abducted his sister. At eighteen, instead of going off to college or joining the workforce, he went to go fight supernatural beings. Every kid’s dream, right? After running away from home, Walker eventually tracked down the vampire who kidnapped his sister and killed him. His sister, who had also turned into a vampire, was also killed by him. From then on, Walker remained a hunter, ruthlessly slaughtering every vampire he encountered, an idealistic lifestyle for someone filled with a desire of vengeance, who’s had his sister and life ripped away from him by blood-sucking creatures. Eventually, he encountered Dean and Sam, the two protagonists of the show; Dean and Sam Winchester are hunters who find and kill—or exorcise—any supernatural threats. Walker and the Winchester brothers quickly come into conflict when their disparate mindsets clash. Walker’s eagerness to brutally murder and torture vampires, who have extricated themselves from drinking human blood, repulses the brothers, leading to his fight with Dean. Dean wins, ties him up, and leaves him alone for someone else to find him.

Walker, as the only relevant black man in Supernatural so far, overshadows his traumatic experience with vampires as the leading factor in his belligerent temperament. Perhaps the brothers’ encounter with Walker would have ended there, but a few weeks after their previous meeting, in the process of exorcising a demon, Walker learns of Sam’s identity as a psychic soldier meant to fight on the demon’s side of an upcoming war. For someone who has not watched the show, Walker’s actions would probable seem justifiable; Walker vows to kill off all of the psychics, starting with Sam. The problem is that Walker stops at nothing to achieve his goals. His chauvinistic desire for justice and annihilation of evil forces, stemming from his first vampire murders, dulled his sense of right and wrong. His reputation preceded him for being an individual who brings harm to himself and those around him. This reputation and Walker’s combative nature simply lead back to society’s own conceptions of black men. Walker’s own reasons for his temperament and society’s reasons are paralleled to delineate black men in a negative light. Sam succeeds in surviving his encounter with Walker as he utilizes one of the most well-known oppositions to black men—the police. The police arrive and place Walker under arrest, which leave him as a ticking time bomb.

Walker reappears once again in season three, persuading another hunter to break him out of prison. Ironically, during his hunt for Sam, he is captured and turned into a vampire. His fellow hunter, who had vowed to help, tried to kill him once Walker told him of his transformation. Unsurprisingly, with his newfound strength, Walker kills him instead and continues to hunt Sam. He uses a young girl as bait, turning her into a vampire as well. In the end, Sam arrives and decapitates him during their fight. Finally, Sam has gotten rid of the murderous, obsessive black man. Walker’s death symbolized the biased struggle between black men and white men. From his back-story to his deranged state at the time of his death, the only significant black man in the series thus far died as his existence put others in peril. Slowly, he became more monstrous as his obsession overcame him, kidnapping a young girl and turning her into a vampire—similar to what happened to his sister. He became what he hated and eventually had to be killed.

As a representative tragic black American story, Walker’s storyline parallels similar situations outside of supernatural fiction; police officers, as certain representatives of society, view black men fearfully and as menaces. Thus, when prison fails to achieve its purpose, death is the next option, an option that sometimes even supersedes prison.

With Supernatural’s portrayal of Walker, they have, knowingly or unknowingly, presented a bias against black men, a situation that proceeds with their depiction of Uriel, an angel. Uriel, who first appeared in season four, is introduced as a “specialist,” an angel who does the dirty work and murders innocents if necessary. As Sam and Dean fail to kill a dangerous witch, Uriel is brought in to exterminate the entire town in order to ensure her death. Uriel is Supernatural’s second important black character, but instead of acting as an agent of benevolence, his identity as an angel is a guise to his true destructive nature and capabilities. His insistence and disregard of human lives demonstrates his true character. The show, instead of breaking their previous bias, render Uriel as another example of a black man’s threatening nature.

Uriel appeared consistently in the show throughout the fourth season. He comes into repeated conflict with the Winchester brothers as he shows disdain for humans. Eventually, the brothers meet Anna, who they figure is out is an angel who escaped her duties from heaven. When Uriel and Castiel, a compassionate and humanitarian angel, find her, they attempt to kill her. The contrast between the two angels in this scene is shown when Uriel displays a greater passion to kill, while Castiel presents a greater reluctance in killing her. From Walker to Uriel, Supernatural has created a disharmonious impression between black men and white men, whether it be in their temperaments or in their actions. Later, Castiel suspects Uriel of the angel killings that had been occurring since the angels’ first appearance. As Castiel suspected, Uriel was killing the other angels who failed to cooperate with his wishes; he was gathering more for Lucifer, who he believed to care more about the angels’ well-being than their Father, who favored humanity above them. While Uriel tries to persuade Castiel to join him, Castiel refuses in disgust of Uriel and attacks him. Their fight eventually results in Uriel’s victory, but when he was about to kill Castiel, Anna appeared and stabbed him in the neck from behind. 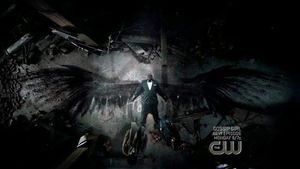 In the way that Lord of the Rings, another visible proponent of racial undertones, possessed an entirely white group of male protagonists, Supernatural follows suit, purging both Walker and Uriel—two black men whose roles suggested humane and honorable champions of mankind—from the cast. The hunter who saved lives, but turned into a vampire and cold-blooded killer, and the angel who was meant to protect humanity, but instead sided with Lucifer in an attempt to bring upon the apocalypse, were made into sick antagonists, perpetuating the notion of black aggression and malevolence. Their transformation into fiendish characters as a result of their storylines also reshapes them into becoming a part of the horror that Supernatural boasts. The fear of black violence stems from the antebellum period, where popular antislavery narrative suggested violent retaliation against white Americans—a main reason as to why this type of racial bias would occur in an American show (Roth). However, it was through those narratives that black men could retaliate against the oppressive atmosphere of slavery. Now, the fear of black violence remains and only suggests a greater horror, an indicator of how accurately placed Walker and Uriel were in a fantasy horror series such as Supernatural.

Although Supernatural was created after Lord of the Rings, an important factor to note when discussing racial undertones in cultural products due to the majority difference of ideals in time periods, the indiscrete biased methods of representation of black men are similar. In their conceptions of race and the black man’s persona, their obnoxious representation of what a black man is, what he does, and how he should be dealt with is repugnant. Their solution to this misperceived natural savagery would be their subsequent death. As a fervent fan of Supernatural, remaining indifferent to what can be easily recognizable as racially prejudiced within the first four seasons of the show is unreasonable. It is within these undertones that cultural products’ representation of black men is comparable to the media’s representation of black men to the extent of being worse, as it chronicles their descent into evil based on the pigmentation of their skin.

An earlier draft of this essay was read by: Francesca D’Arista.

I have written this essay in the style of Greg Tate.

Roth, Sarah N. “‘How a Slave Was Made a Man’: Negotiating Black Violence and Masculinity