The fact of the matter is: racial stereotypes exist, and with the current state of society, they are not going anywhere. It’s a matter of nurture over nature. People of a specific culture aren’t born with some pre-disposition to participate in it; the color of their skin has no genetic impact on what their ears’ will find pleasurable to further dictate what genre of music they will prefer. Rather, they are raised with society telling them how their race should behave, and many oblige.        `

It becomes a slippery slope. As all aspects of culture become attributed by society to specific racial cultures, there are only so many options an individual has. They can do one of three things: they can participate in the culture prescribed to them by their race, they can attempt to lend themselves to another minority’s culture which can often be seen as problematic, or they can forgo their individuality and participate in the dominant culture. All would seem to be rather caging.

As individuals choose to play into these racial stereotypes, consciously or not, they submit themselves to being held captive to the lower-class that minorities are reserved to within the social structure. As specific races are reduced to a rank below the majority race, the culture that coincides stereotypically with that race in turn becomes indicative of a lower rank in society as well. I of course do not condone this, but a simple stroll through the media can prove that it occurs.

But what if one were capable of participating in that culture without being recognized as a member of it? Can these lines then just be blurred, or can individuals choose to jump back and forth at will like some game of hop scotch? At what point would that cease?

It becomes increasingly more and more problematic. Yet it occurs.

It can be seen with culturally inappropriate Halloween costumes. The majority culture temporarily donning themselves with a costume that for other cultures, is just who they are. It becomes an attempt for the majority to find an exception for which they are exempt from being chastised for cultural appropriation, though it is never okay. I recall a former basketball teammate from back in sixth grade. She was a white girl from a wealthy suburban neighborhood. It is well-documented in culture that basketball and hip-hop have a close partnership. But this individual chose to take that to an extreme, attempting to act “hood” and “gangster” to the extent of even dubbing herself an “inside-out oreo” despite living in the suburbs of San Diego, and in all physical appearance, being of an entirely white genetic makeup. These behaviors did not continue as others acknowledged the issues associated with the situation, but the question still becomes: why? It goes beyond why individuals feel they should be allowed to do, which I think can be chalked up to privileged individuals who are unaccustomed to being told “no.” But why would an individual choose to do this? What are they trying to escape from in their culture? For an individual who is a member of the dominant culture, and then given this privilege simply for being a member of that, what is the individual attempting to escape from? 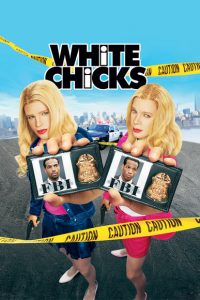 Take White Chicks for example: a movie in which the entire premise is emphasizing these racial stereotypes for satirical purposes, specifically those associated with the majority culture, as the main characters, two black male cops, Kevin and Marcus, go undercover as two “white chicks” from the Beverley Hills, Tiffany and Brittany, wearing complete costumes to entirely physically resemble these women.

The main characters would have not had to go undercover were it not that Brittany and Tiffany were involved in a slight car accident, resulting in some minor scratches on their faces. Physically, they are still in great health, yet they are so unafraid of presenting themselves to the public eye looking anything less than perfect that this entirely holds them back from enjoying what they have dubbed “the last important weekend of the social season.” One of the twins even ventures to tote this event as “like the worst day of [her] life.” 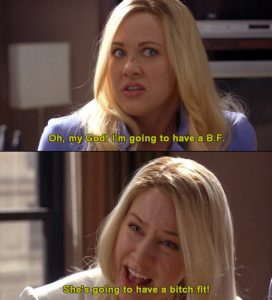 And this is just the beginning of the examples showing the importance of such events, and the importance of their physical beauty, as they seek self-worth within popularity and fame. This is what they see to be the “perceived constraints of whiteness.” This obsession with their appearance, accompanied by a lack of intelligence, becomes not only the highlighting features of these characters, but the center-point of their entire beings. 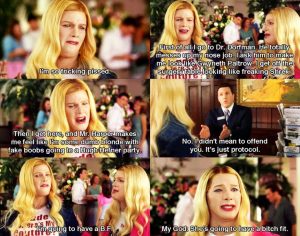 Similar to their extreme focus on physical appearance, this lack of intelligence is taken to an extreme, as a New York Times review notes that, “If it’s possible to libel spoiled, empty-headed socialites, the Wayans have done it: nobody could be this stupid” (Kehr.) This is further demonstrated when the posse of three girls is trying on outfits, and one of the girls takes on a particularly self-deprecating manner towards how her weight appears in these outfits. She comments about herself whilst looking in the mirror, “Hi I’m Cellulite Sally, look at my huge bedonkey. Now who could have said that? Yeah, it’s Tina the talking tummy. I can’t even wear a short skirt… and a top without looking like a fat pig… Somebody throw Shamu back in the ocean!” 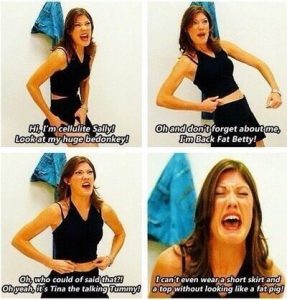 As White Chicks takes these character’s obsessions with their looks to an extreme, it does so in a satirical manner, highlighting and poking fun at what these white women would consider to be their burden as popular, privileged members of society. They acknowledge that the media and the other class members have certain expectations in place for how they should look and behave, and they see that as their struggle, which may seem stressful from their narrow-minded perspective presented in the movie, but realistically is quite minimal in the grand scheme of things.

Examples of this shallow asphyxiation to looks and material things are riddled throughout reality television and all mass media. The Kardashians have made themselves a franchise based off that. While instances of it may go unnoticed, it occurs frequently enough to not be considered incredibly noteworthy. However, White Chicks did receive some praise from the likes of Shannon Luders-Manuel, who explained how White Chicks succeeds by “challenging racial stereotypes… through satirization of those very stereotypes” (Luders-Manuel.)

The most important scene in the movie, though, occurs when the girls are all in the car, singing along to the radio station. The next song comes on, a rap song, and forgetting their covers Kevin and Marcus get super hyped up while rapping along and, whilst shouting out the lyrics, blurt out the n-word without even thinking about it. The three white girls are shocked by this action though, and cannot believe that they would use such language or behave in such a manner, as they are pretending to be Tiffany and Brittany in this moment. In attempt to cover for themselves, they retort that it’s okay because “nobody’s around,” as if white people saying the n-word were like a tree falling in the forest: it’s not a problem if black people aren’t around to be offended. Despite the incredibly misguided logic in this statement, the other girls are more than ready to believe it, and follow in line. When the scene ends, the girls are all dancing and shouting the lyrics at the top of their lungs, as if they’ve just been waiting their whole lives for someone to invite them into black culture and tell them that it’s okay to behave that way. Yet as these actions take place in private, without the watchful eye of the media, it allows them to jump across the boundary with no repercussions; they don’t even have to face being associated with the minority race, and are able to continue on knowing that they will never have to relinquish their privilege, despite partaking briefly.

This perfectly exemplifies how White Americans are prone to consuming blackness. However, it must be noted that this only occurs when it is seen as convenient or beneficial to the individuals. When rappers are celebrating their blackness, suddenly individuals try to consume those aspects of blackness so that they can participate. In these cases, the white individuals are just afraid of feeling left out, because clearly privilege isn’t enough to keep an individual satisfied. I feel it is safe to say though that you likely won’t find a white individual attempting to consume blackness when in the presence of law enforcement. It won’t benefit the white individuals in any way, so they’ll make the choice not to consume it. But that ability, in itself, is the whole problem; that choice. Black individuals don’t have that choice. They look black, so they will be perceived as belonging to that black culture until proven otherwise, and even still, any newcomer will continue to make that same assumption. As it connects to an arbitrary physical trait of skin color, it makes it impossible for the choice to be made to entirely disassociate oneself from their racial culture, no matter how much effort is put into it, because until the structure of our current society fundamentally changes, these races and cultures will still be associated together, and race is inescapable.

There are aspects of these cultures outside my own that I appreciate greatly. Not because they are dubbed “ethnic,” as would be value enough to some, but because there is indeed significant merit to many aspects of other cultures. Asserting that white culture is the dominant culture is rather not me ceding that it is actually the better culture, but rather it is just a remark on the fact that it is the culture intertwined with the group in power. I could then choose to readily consume these other cultures; it is entirely possible. I mean, what if nobody’s around? And, if I did, and began to blur that line, where would the line come which could not be smudged? As one line begins to blur, everything begins to fall apart. Showing respect and appreciation for a culture outside your own has a quite markedly different impact than attempting to adopt and consume outside cultures. And I intend not to cross that barrier.

A prior version was read by Margaret Meehan

Written in the style of Chuck Klosterman.