Since I first saw The Breakfast Club when I was 13, it has been one of my favorite movies. It is simple and easy to understand; it presents an engaging and relatable story. I was thoroughly intrigued by each of the characters and fell in love with the story. Despite my love of this movie, there has always been something that I felt was off about it and I could never really place my finger on just what it was. Now I find myself wondering what the purpose of this classic, worn-out story is. There must be more to it than what it presents itself to be: a story of outcasts working to overcome differences and opposites falling in love.

On the surface, this is a movie about the breakdown of stereotypes and breaking of molds that we use to define those around us. However, in reality, even though the movie purports to break down these stereotypes, it simply reinforces them. The movie accepts the stereotypes it presents with a defeatist attitude, resigning itself and its viewers to the fact that stereotypes are an inherent part of our society. Many stories will at least attempt to provide solutions to the problems they present with idyllic endings and happily-ever-afters, yet The Breakfast Club does not even make a half-hearted attempt to do that. 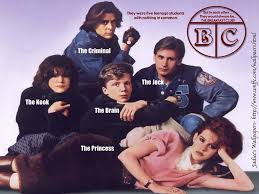 The stereotypes this movie presents are extremely harmful and confining, separating all in our society into a certain number of little boxes that define people’s personalities and their lives. The worrisome part is that since this movie came out in 1985, the story has become a staple in our society; most people know the story of The Breakfast Club and view it with an endearing attitude. What does this mean for all of us who love this movie? Are we buying into its defeatist attitude and the stereotypes it presents?

To answer this question, we must first determine what the stereotypes this movie is presenting actually are. It helps to start broadly here, and realize that the surface level stereotyping that the movie does is most clear in the examples it presents of the classic high school students. For a basis, these are the types of stereotypes that people dress up as for Halloween because they are so widely recognized and accepted. The Breakfast Club states that these stereotypes do not only exist in the sense that people dress up as them for Halloween, but in the way that society works to mold people, especially teenagers, to fit into certain stereotypes.

The Breakfast Club attempts to comment on these stereotypes by exaggerating them and attempting to portray the “deeper” side to each character. For example, Brian is the classic nerd. He is smart and participates in the stereotypical ‘nerd’ clubs: “the math club, the Latin club, and the physics club.” He has been confined to this stereotype not only by those around him at school, but by his parents. In the first scene of the movie, Brian’s mom places pressure on him to “use the time to [his] advantage” and study as much as he can. In this way, his mother is forcing a stereotype onto him, in a way that leaves Brian with no freedom to figure out who he actually is. Next, John Bender embodies the stereotype of the criminal. He is the kid in high school who does not come to school or follow the rules. Thus, people assume that he is a bad person. However, the movie attempts to show that there is more to this stereotype of the criminal than most people realize, providing Bender with a back story of an abusive home life and a father who believes he is worthless. There cannot be a movie about high school stereotypes without portraying a “popular girl,” and The Breakfast Club fulfills that requirement with the character of Claire. Claire wears diamond earrings, is a participant in Student Council, has many friends, and conforms to fit in with those friends. Popular girls are often seen as lacking substance and being privileged, but the movie attempts to break this stereotype by making Claire more self-aware and showing that she dislikes the pressure she feels from those around her to act a certain way: “I hate having to go along with everything my friends say!” The popular girl is always accompanied by the athlete, who in this movie is a wrestler named Andy. In many ways, Andy fits the stereotype of the dumb jock who uses his status to bully other people (he is in detention for taping someone’s balls together) and repeatedly uses force to get what he wants. But the movie also tries to show that Andy breaks his stereotype in the way that he treats Allison and becomes vulnerable during the “confession circle.” Finally, there is Allison, who is stereotyped as the crazy, mentally-ill person. Throughout the first half of the movie, Allison barely talks, only making a few grunting noises here and there. Allison’s scream in response to what Claire says about her parents, the cinematography, the way Allison is dressed, her makeup, and her movements portray her as animal-like. In this way, the movie draws an analogy between the mentally ill and animals. This association dehumanizes the mentally ill and stereotypes them as something less than human. The story tries to break this stereotype by having Allison open up to the other characters, fall in love with the athlete, and be given her a makeover.

This all seems well and good: The Breakfast Club presents a bunch of stereotypes, but then shows the characters breaking these stereotypes and moving against the grain of society. What is the problem here? The problem is subtle because this is not exactly what the movie is doing. The movie does not actually portray the characters breaking the stereotypes they represent; instead it ingrains these stereotypes deeper into the characters’ personalities, making it so that there is no escaping these stereotypes. The stereotypes are trivialized and viewers are subconsciously led to think that the characters simply are their stereotypes. The clearest instances in which the movie does this are seen in the characters of Andy, Claire, and Allison. For example, although the “deeper” side of Andy is shown when he talks to Allison, Andy only fully begins to appreciate Allison once she has gotten a makeover, instead of simply valuing her for her personality and because he sees something in her besides her looks. Then there is Claire, who also fails to have her stereotype broken, with her “shallowness” being reinforced throughout the movie: her talent is putting on lipstick using her boobs; her major act of kindness is giving Allison a makeover; her last action in the movie is giving Bender her diamond earring. Then, of course, there is Allison. The movie makes no effort to truly combat her characterization as mentally ill, but instead perpetuates it. The issue of mental illness itself is trivialized. Allison is “fixed” by Claire when she is given a makeover. However, mental illness does not simply go away like that; it is a lifelong struggle that people who suffer from mental illness must deal with each day. Additionally, the stigma surrounding mental illness that was widely present in society then and is still prominent in the world today, was given no concrete solution. According to the movie, the mentally ill should be forever condemned to be seen as subhuman.

It would be a travesty if after all this talk about stereotypes, I did not discuss the gender stereotypes that this movie presents. These stereotypes are the most dangerous that The Breakfast Club presents because they are not as obviously presented as the previous ones discussed, and their implications are just as serious, if not more so. The movie reinforces the stereotypes often applied to women, and trivializes the discrimination that women and outcasts of society face. The first stereotype it enforces is the one that portrays women as weak beings needing the protection of men. The number of times that Claire fails to stand up for herself, and Andy or Bender feel responsible to come to her rescue is frustrating. Each time this occurs, viewers subconsciously root this idea of women as weak deeper in their minds. Another stereotype the movie enforces about women is the concept of women as objects whose function is to sit, look pretty, conform to societal pressures and be there for men to “take.” Bender thinks it is appropriate for him to touch Claire without her permission; he mainly sees Claire as a sexual object, not as a strong human who possesses her own agency. Claire makes no effort to combat these beliefs, but reinforces the fact that a woman’s job is to look pretty when she puts on makeup using her boobs and gives Allison a makeover. Claire has none of her own agency and does not work to obtain any. Thus, The Breakfast Club validates this view of women and provides no solution to the problem that half the world’s population is seen as less than the other half. The movie pushes a male agenda, and when we decide that we like the way that Claire and Allison act in the movie (and for those of us who like this movie, it is hard to say that we do not), we are supporting this male agenda. Women are weak; women need men; women are pure and their value lies in their virginity; these are the statements that we accept when we watch this movie.

We (the viewers) buy into the stereotypes presented by the movie and the breaking of these stereotypes by the characters; but in fact, this is all a lie. The stereotypes are not broken, but trivialized and further ingrained. The movie has resigned itself to the fact that the stereotypes it presents can never be overcome. When Brian asks Claire if the five of them will all be friends on Monday, Claire responds honestly saying, “I don’t think so.” The Breakfast Club takes the easy way out, and instead of providing fixes (even frivolous ones), the inherent problem of stereotypes within society is just accepted. Some may bring up the end of the movie, stating that the opposites falling in love (Bender and Claire, Andy and Allison) is a breaking of stereotypes. However, the stereotypes and the falling in love are non-sequiturs; just because the opposites fall in love, does not imply that the stereotypes were broken. Thus, this story does not provide any sort of solution to the problems in our society but only engrains them further.