Here’s the thing, I’m not the biggest movie person.

In fact, I could spend weeks on end without sitting down for 2 or 3 hours to watch a movie. In fact, some people (my family) would go as far as to say that I’m not a movie person at all. Growing up, they continuously forced me to watch movies with them, watching me reluctantly stay, complain or look at my phone, waiting for what seems like an endless, predictable, and frankly, stupid movie to end.

Now, don’t take this to mean that I never watch movies or don’t appreciate any movie at all. I do. In fact, I find it pretty convenient to have movies available when you are trying to burn time for hours on end such as during a vacation. This scenario occurred this past summer as my family traveled to Rome and Greece. On the long flight from New York to Rome, I think I set a record for the most movies I have ever watched continuously, with a whopping—drumroll please — 3. I’d like to believe that I selected a diverse selection of movies from the ones the airline offered. One movie in particular, Eat Pray Love, caught my eye because I was convinced that the movie took place in Rome.

Little did I know that I had signed up for a movie that was a combination of a chick flick, a travel log and a mindfulness/spiritual journey. The story is simple: a 31 year old woman named Liz Gilbert appears to have the perfect life as a successful journalist living in New York city with a husband and a great group of friends. However, she finds herself continuously depressed by the state of her marriage and feels that she lacks energy and happiness in her life. Thus, after a divorce, a rebound romance and much deliberation, she decides to spend a year traveling in Italy, India and Indonesia. Here’s the goal; explore pleasure in Italy, devotion in India and find balance in Indonesia.  The movie follows Liz through what seems to be a perfect journey along which she realizes that she has always been her biggest problem all along, changing and making friends along the way and falling for the man who she is bound to marry. I found this movie to be a nice light film to watch as I realized I was unable to sleep despite my countless attempts to avoid jet lag. Little did I know that this movie had blown up in the early 2000s, based on a book written by Liz Gilbert herself.

In an attempt to assess the Eat Pray Love phenomenon, let’s examine what started it all, the novel itself. Part of the reason why it was successful was because it belonged to the trendy “self-help” genre that had started gaining popularity around this time (Sanders & Mouyis). Obviously, I was a little late to the trend, considering I was around 10 years old when this occurred. But even now it is not hard to look around the bookstore and find an abundance of books on wellness and mindfulness reminding us that even in the hardest of times we can still find fulfillment.

Now back to Eat Pray Love, this book fits perfectly into the self-help genre as Gilbert clearly expresses her goal of finding some sort of enlightenment through this spiritual journey. While this goal sounds fine and dandy, according to Sanders and Mouyis, it “moves women away from political, economic and emotional agency by promoting materialism and dependency masked as empowerment, with evangelical zeal.” So, yes, Liz was feeling pretty down about her life, but what did she do in order to try and fix it? Did she go to a therapist to get marriage counseling or talk about her depression? No. She decided to abandon her job, her family and marriage to travel around the world for a year to become “whole” again (Sanders & Mouyis). This mentality, to be blunt, is damaging not only because it screams financial privilege as an unrealistic option for many women in the US, but because it also stems from a dark ideology: misogyny.  The idea here, according to writers Mouyis and Sanders, is that women are “deeply flawed” and need to devote themselves to fixing themselves otherwise they will lead miserable lives. How can they solve this imminent problem? The answer is simple: contribute to the tourism industry through capitalist consumption of foreign cultures. In an Indian ashram, Liz consumes spirituality and in Bali she consumes traditional healing skills and advice.

This is where Eat Pray Love begins revealing its true colors, though it was there all along when looking at Liz’s relationship with the people of color of the movie.  Now, I’m not accusing Liz of being a racist but in examining her relationships with others, we see that the sole purpose of the characters seems to be to serve Liz. To being with Liz becomes absorbed in the idea of following a Guru Ashram through her ex-boyfriend, a devout follower of the Guru.  This obsession, however, is trivial as she confesses to her best friend that this mediation is the same for her as the time when she immersed herself into her kitchen renovation in an attempt to become the perfect wife and cope with her chaotic life.  This devotion to the Guru is a type of distraction denoting the superficiality of her spiritual journey as it becomes more of a way for her to escape her problems in the East rather than the West.

What I find particularly fascinating is that out of all the people in India, she forms the most authentic friendship with an elder white man who becomes her true guru, teaching her to surrender to her thoughts and love the world. The only other person she forms a friendship with is with 17 year old Tulsi who is engrossed with Liz’s life despite struggling with her own life as she is forced to have arranged marriage. In many of the scenes, she tries to convince Liz of the many positive aspects of her life, almost serving to console Liz’s anguish all while highlighting her ridiculousness. Nothing is done to try and stop the wedding and what’s worse Liz can’t help but think about her own wedding during Tulsi’s wedding.

Finally, Liz arrives at her final destination, Bali, where she reunites with the healer and advisor Ketut. During Liz’s first visit, Ketut consoles Liz by telling her how lucky she is and that she will see him again. The second time around he does not recognize Liz, making her angry and upset. In this moment Liz is furious because he has always catered to her and she forgets the in-authenticity of her experience and the fact that there are probably many blonde American tourists visiting Ketut and asking about their love lives. Regardless, he continues helping her, further accentuating Liz’s sense of entitlement that he should cater to her. Moreover, the movie lacks any information on Ketut’s personal life, fetizshizing his personhood as one that does not exist beyond his powers and counsel.

It was at this moment that I realized something. Throughout this essay I have investigated Liz’s experience traveling in India and Indonesia but what about Italy, the only western country she visited? I had one question that irked me, why did Liz travel to find spirituality and spend her entire time in Rome eating pasta? Why is she only drawn to Eastern spirituality?  Professor Justine Toh responds, suggesting that religion (specifically Western religion) is viewed as “institutional, rule-bound, uptight and stifling”, while Eastern philosophies are “more intuitive, less concerned with laying down the law than with giving you a set of principles to take or leave at will.” Thus it is only through this exotic journey to the East that Liz can selfishly and self-indulgently find her own happiness without western restrictions. In fact, she uses her encounters with foreign cultures to learn more about herself, not as much to learn about others.  This is problematic for so many reasons but also, and let’s not forget, incredibly appealing for western women.

The question then is, could western women get away with focusing solely on themselves and their happiness in a society that so strongly emphasizes women putting their needs secondary to others? Liz does not think so, in fact, her experimentations with Eastern ideologies grant her the opportunity to dismiss this aspect of Western culture. But there are plenty of problems with this, while she rejects her own culture, she willingly appropriates another without considering the effect she is having on the people around her. It is important to recognize that Liz hasn’t fully committed herself to Eastern ideology and is hypocritically exemplifying and perpetuating one of the most toxic and damaging western ideologies, consumerism. In truth, Liz’s quest to find herself stems from consumerism ideologies itself as it teaches us from an early age to engross ourselves with what Toh calls “individual happiness and fulfilment”. 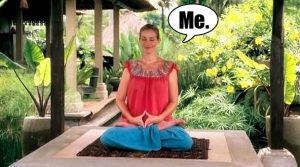 I know I’ve identified some pretty horrid stuff out of what seemed like a rom-com novel turned into a movie, but just wait there’s more. I had previously talked about the novel/movie’s success but I never talked about what that itself had resulted in. Liz Gilbert, the new guru to white women, came up with a line of Eat Pray Love products that allowed her to profit off of the Eastern spirituality that is itself opposed to people profiting off others in that matter (Williams, 4). Here, white people are taking deeply scared spiritual ideologies and using it for their own profit ( Ibid, 3). , In fact, tour companies are utilizing the success of this book to promote spiritual vacationing through what scholar Ruth Williams calls “authentic encounters with native populations”. An example of this marketing is traveling to the Ganges ghats in Varanasi, India, in order to ‘‘feel the beating heart of the Hindu universe’’ supporting western consumption of authentic interactions with local culture as type of product (Williams, 10).  Sanip Roy critiques this form of tourism as a “new colonialism” that grants white people the opportunity to “discover themselves in brown places” by utilizing native populations and their culture (Roy).  Essentially this new lifestyle utilizes eastern culture and people as spiritual guides to “facilitate the self-realisation of the white woman”. (Toh)

While I find this to be unsurprising, especially considering the current state of our marketing culture that so selfishly promotes consumption as the key to happiness, I wonder, what does this truly mean for women’s empowerment?  Is the most effective way to empower women to find their balance and listen to their own needs? I most certainly hope not, as it not only puts working class women at a disadvantage but also exploits hundreds of years of rich Eastern culture. There must be a solution. But, the prominent issue here is how these women got to the crisis in the first place. The ideologies that our society promotes are hurting women and with that the way they interact with those around them all over the world but also nationally. Liz would consistently lament her inability to love back her best friend as much as her best friend loved her. I believe something must change for everyone’s sake.

This essay imitates the style of Chuck Klosterman

This is not a first draft and was looked over by Ian Pultz-Earle and Jessie Hem.